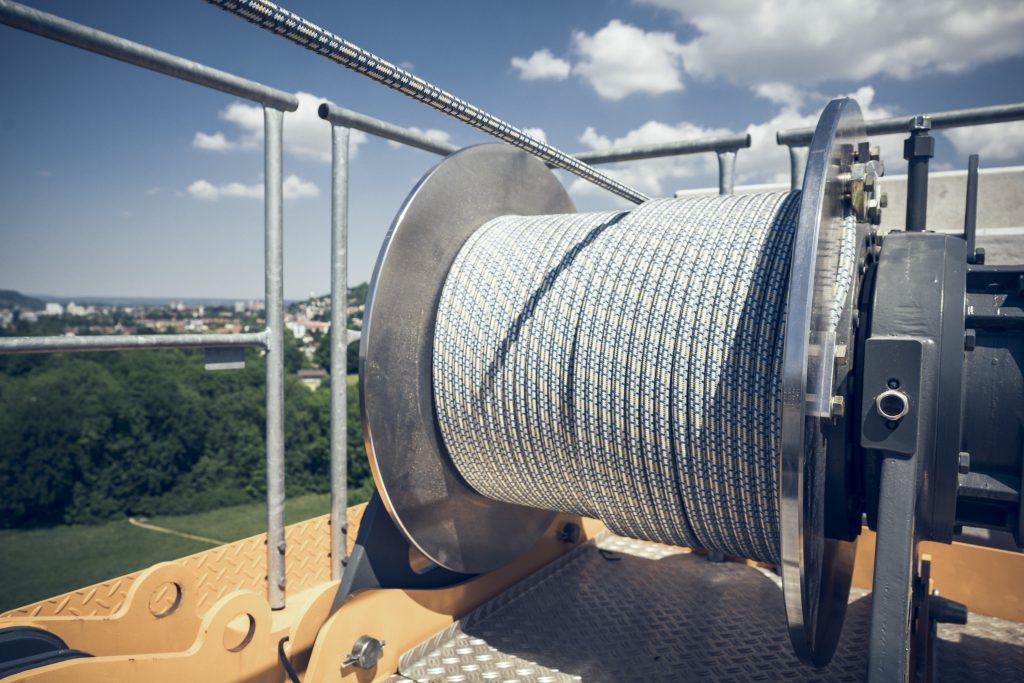 Field tests for the high-tensile fibre rope developed by Liebherr and Teufelberger were conducted on 11 tower cranes.

Working with Austrian rope manufacturer, Teufelberger, Liebherr has developed a new type of high-tensile fibre rope for hoisting applications which will increase the lifting capacity.

During the development project, more than 100 different fibre rope prototypes, measuring around 70,000 metres in length, were developed. These underwent extensive testing on test benches specially developed for the project and in field tests conducted in five different countries. These tests provided confirmation that the fibre rope not only weighs around one-fifth of a conventional steel rope, but also lasts four times as long and is significantly easier to handle. Operational safety is also guaranteed – the different wear states are clearly identifiable.

Tests in rope bending machine and climate chamber
First of all, there were various tests in classic rope bending machines. Furthermore, a crane rope test bench with a hoisting height of 42 metres was constructed. This enabled ropes with a thickness of up to 31 millimetres to be tested with a test load of up to 45 tonnes on a rope drum with multiple rope turns. The tests for the 20 millimetre ropes have already been concluded.

Liebherr also built a climate chamber for this project in which the rope was subjected to a wide range of weather conditions. The chamber generated temperatures of up to 80 degrees and as low as minus five. It also added sand or dust to the air to simulate site conditions in the desert. The next moment it generated monsoon-type rain.

Field tests with tower cranes
High-tensile fibre ropes in various diameters have been undergoing field tests on eleven tower cranes in Germany, Austria, France, Belgium and Switzerland since 2016. The benefits of the significantly lighter rope are particularly noticeable during the assembly and dismantling of the crane – fibre ropes can often be fitted on the crane by hand and without any auxiliary reeving winches. Re-reeving the hook block is also quicker and easier. The cleanliness and lack of maintenance required during operation received special praise as the rope does not require lubrication due to its plastic fibres.

Tests confirm fourfold service life
The high-tensile fibre rope is extremely wear-resistant and can withstand a high number of bending cycles. It has fourfold the service life of a steel rope. This longer service life can reduce the number of rope changes.

The crane operator can easily and safely identify when the rope requires changing. Liebherr has used a redundancy strategy in this case to enable the end of a rope’s service life to be identified reliably in all rope constellations and applications. The end of the rope’s service life is primarily identified optically by the jacket on the rope undergoing defined wear shown by the colour which clearly indicates when the rope must be changed.

Furthermore, the fibre rope can withstand multiple notches without suffering immediate damage. The winding pattern of the new fibre rope is similar to that of a steel rope. If the lower layers have less tension than the upper ones, however, the new fibre rope is more tolerant. In the event of notching, it will free itself unlike steel ropes which generally become enmeshed.

To achieve the controlled wear of the fibre rope, Liebherr selected the time-tested Lebus winding system from the very outset of the development. A clean winding pattern on the cable drum minimizes wear and thus extends service life.

Next year at the Bauma in Munich, a new tower crane series will be launched featuring fibre rope. In other words, Liebherr will be launching its fibre cranes for sale from April 2019.