In the early morning hours of April 6, a three-alarm fire broke out at a construction site at the corner of Glenmore Road and Union Road in Kelowna, B.C. The blaze completely destroyed the four-storey condominium project and left an extremely damaged Potain HDT80 crane owned by CS Construction hanging over the site for several days. Leavitt Cranes were contracted with taking down the damaged crane.

“The big thing here with the crane was being able to fold it up and dismantle it without the use of the hydraulic systems or the electrical systems because they were pretty much burnt out on the crane,” says Dean Lucarino, double charge hand and crane technician with Leavitt Cranes. “That specific crane uses hydraulic systems to hold the jib up and also uses a cable over hydraulic system to tower the mast down. There were two mobile cranes used – one to hoist personnel and another to hoist equipment that we used to fold the crane up.” 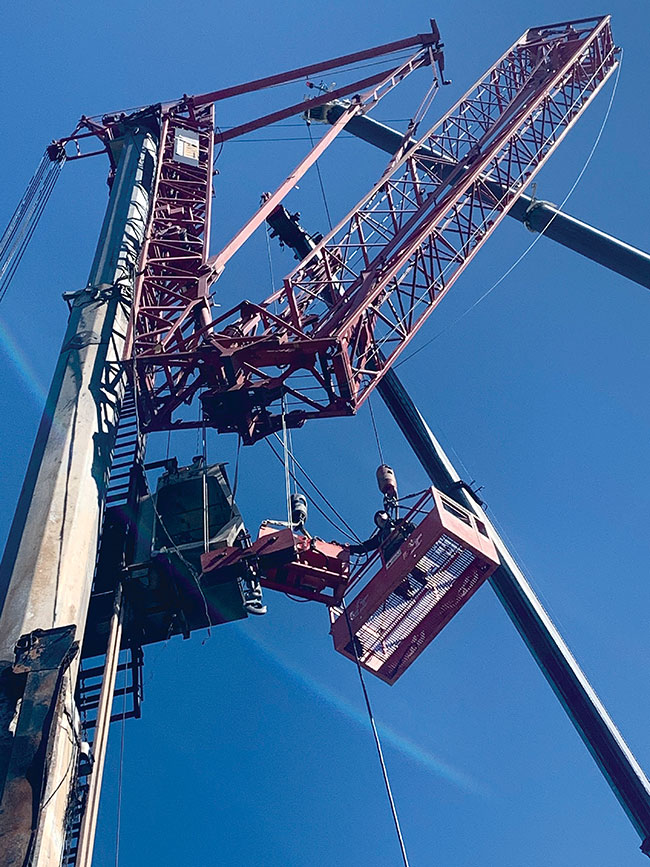 The tower crane was self-erecting; however, all hydraulics were damaged in the fire requiring an eight-hour effort by Leavitt Cranes and their subcontractors to dismantle it.

Leavitt Cranes coordinated and planned the takedown effort and subcontracted RKM Crane Services out of Chemainus, B.C. to utilize their 120-ton Liebherr LTM 1095 in an 80-ton configuration with an 80-foot radius and 20,100 lb. of counterweights. The second crane utilized was provided by Kelowna-based Dave’s Crane and Equipment – a 90-ton Tadano GT 900 XL with 35,000 lb. of counterweight and 144 feet of boom, which was used to hoist the pump.

Due to the potential danger of the damaged crane hanging overhead, fire investigations would not be able to inspect the site until the crane had been taken down. That meant Leavitt Cranes had to coordinate with the fire inspectors how to set up their operations while disturbing the site as little as possible to preserve any possible evidence.

“We were very specific in planning a pathway to get into the site,” says Lucarino. “When we did all our pre-meetings with the fire department and WorkSafeBC, we created a pathway to get into the site and everybody had to stick to that pathway and not disturb the site in any other way. There was a ton of debris – the whole site burned down to the slab, pretty much. Burnt lumber, steel equipment, there was a burnt forklift, the generator that powers the crane was brunt. There were quite a few things that we had to deal with.”

The planning and coordinating with the fire department and WorkSafeBC took place largely the day before and the morning of the operation. They also had a drone fly into the site the week before to take video and photos of the site to inform their planning. Due to that meticulous preparation, the takedown operation was conducted without incident in about eight hours. 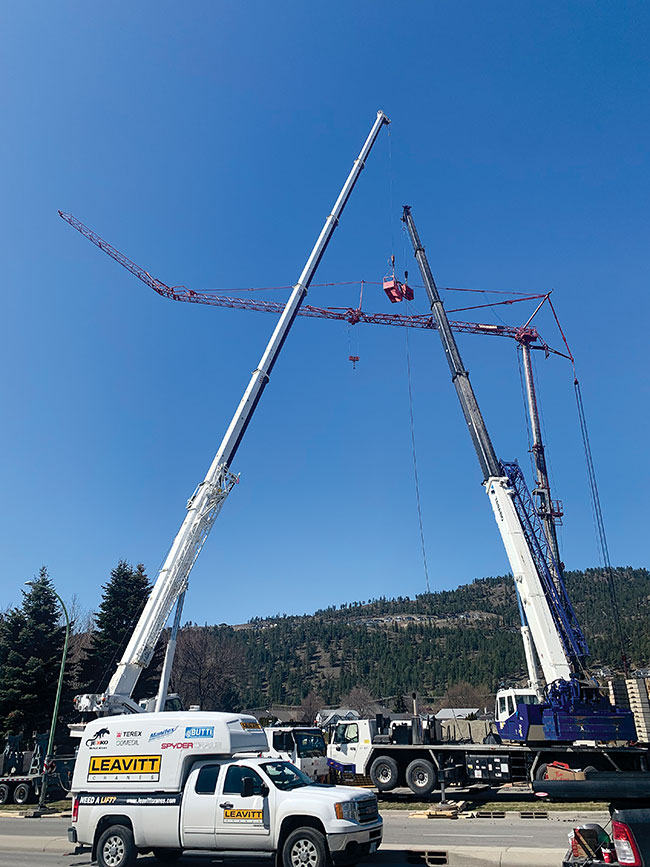 A pair of mobile cranes – a Liebherr LTM 1085 and a Tadano GT 900 XL – were used to lift personnel and equipment to facilitate taking down the damaged crane. Photo: Leavitt Cranes

Lucarino says this type of job – taking down damaged equipment after a fire or other incident – isn’t common, but he’s definitely been tasked this type of job several times over his long career in the crane industry.

“I specialize in this type of self-erecting crane,” says Lucarino. “Our team put our heads together and figured out how we can safely dismantle this crane – aside from the way the manufacturer wants us to dismantle it in a perfect scenario, which we definitely did not have. When you have a piece of equipment that’s burned that bad and it’s hanging in the air like that, nothing is really normal about it. Us knowing the equipment as well as we do, we just take an approach to look at the scenario up front and make a plan to try and take it down as safely as possible. There’s just so many unknowns. We got to pat ourselves on the back. We didn’t really have any hitches and the crane came down as safely as possible. It went really well.”

The building was vacant at the time of the fire and there were no injuries to any members of the fire crews who tackled the blaze. Kelowna Fire Department’s Rick Huber, who led the investigation into the fire, says that no conclusive cause for the fire was discovered on site.

“Any of the evidence, if there was any, is gone,” says Huber.

“We were knee-deep in burnt wood. There was nothing else there. We couldn’t conclusively say one way or another. There were a few things we could possibly rule out, but that was it.”

Huber says by the time he arrived on site, fire crews had already been fighting the blaze for a couple of hours. By that time, the tower had started to straighten itself up, but fire crews told him there had been a 20 to 30 per cent bow in the crane due to the heat, which was causing it to lean over.

“Once we started getting the fire knocked down, the heat went away and it straightened itself right back up,” says Huber.