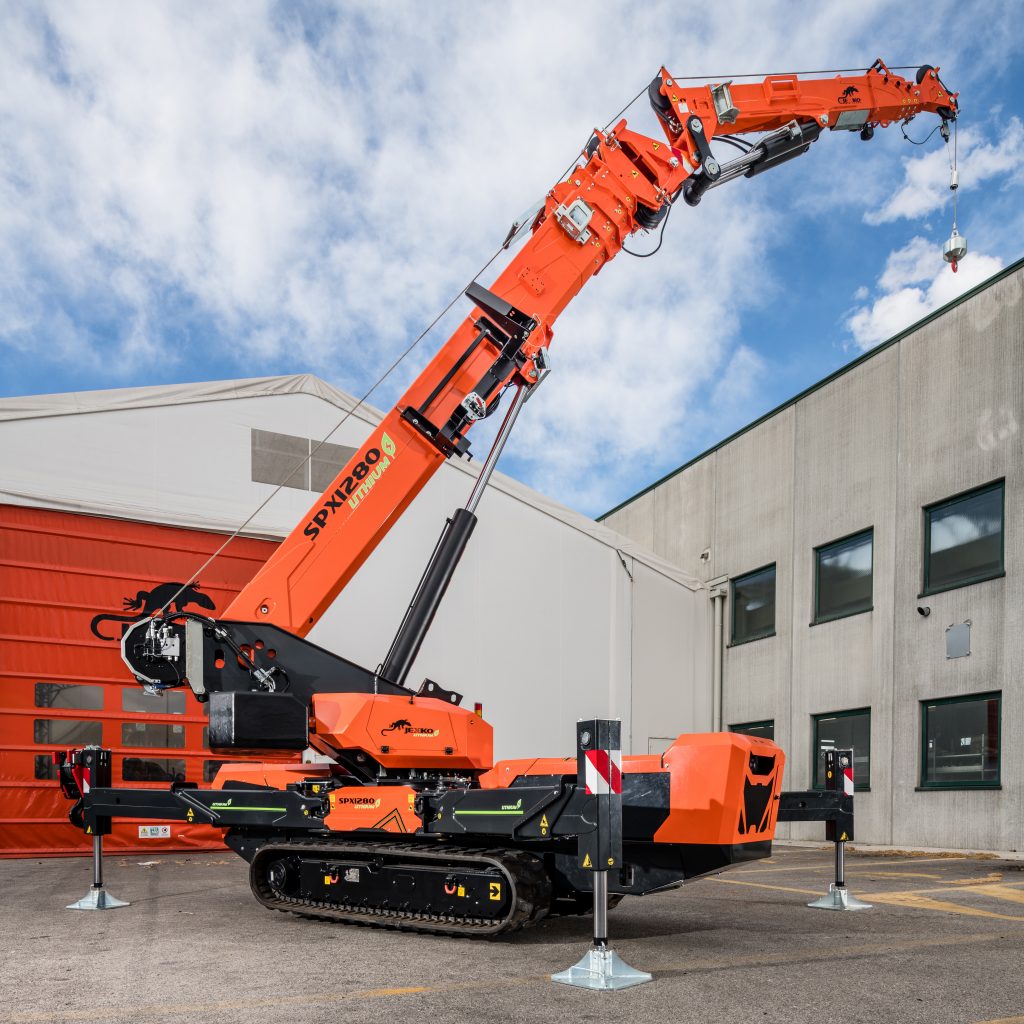 Jekko has launched a new SPX1280 mine crane with a lithium battery, thus completing its range of mini crane with battery-supplied electric engine.

This mini crane features high performances and low environmental impact and is an answer to the new requirements of the lift & handling industry.

The SPX 1280 has a maximum lifting capacity of eight tons and a maximum working height of 26.6 metres (when hydraulic jib is installed).

The mini crane can count on a sophisticated and cutting-edge stabilisation system. The outriggers, directly operated with the radio remote control, feature hydraulic rotation between zero and 45 and telescopic hydraulic extension, for endless operational configurations. Depending on the opening angle and the extension of the stabilizers the software can define in real time the maximum safe working load in a specific point, with seven load charts for each crane configuration.

Thanks to the new digital electro-hydraulic Danfoss distributor, the machine smartly and autonomously regulates oil pressure and flow rate according to movement, load and movement’s speed. Movements are move smooth and precise, giving the operator a greater feeling of control, and it’s possible to work simultaneously with three functions.

SPX1280 is equipped with a 1.5-tons hydraulic jib, which features compact dimensions and clean design thanks to inner cylinders and can work with a negative angle up to -10, and with a 3.5-tons runner jib which can reach the narrowest corners (both of them with plug & play attachments).

The control of this precise and powerful machine is totally in the operator’s hands thanks to the new user-friendly radio remote control, with a software developed internally by Jekko, which allows to directly activate or deactivate all crane functions and tools.

The power of lithium

The 20 kW three-phase engine is powered by a custom designed 96 V lithium battery pack with a capacity of 400 Ah. A triple battery charger is installed on board the machine, to charge with mono-phase (230 V) or three-phase (400 V) current. The machine can be operated while the battery is under charge. All battery parameters and errors can be easily visualized on the display of radio remote control.

Thanks to the electric engine, the new version of SPX1280 can operate also indoor or in delicate job sites with no emission. Lithium batteries allow unchanged and constant performance even in case of intense use for the whole charge duration, and they have longer life as compared to lead acid batteries. Moreover, a lithium battery-powered electric engine implies less maintenance costs than a standard diesel engine.

“Jekko has always believed in the concept of battery-powered electric mini crane, efficient and ecological. The technological frontier is now moving towards lithium batteries, which allow better performance and have a great value for money. Jekko is investing a lot in this new technology and our efforts are being rewarded by an excellent market response,” said Alberto Franceschini, Jekko sales director “The diesel version of SPX1280 has been a great success from the very beginning. Now the availability of the lithium battery-supplied version is creating even more opportunities, because it meets the needs of an ever-increasing share of customers caring not only about crane performance, but also about environmental sustainability”.