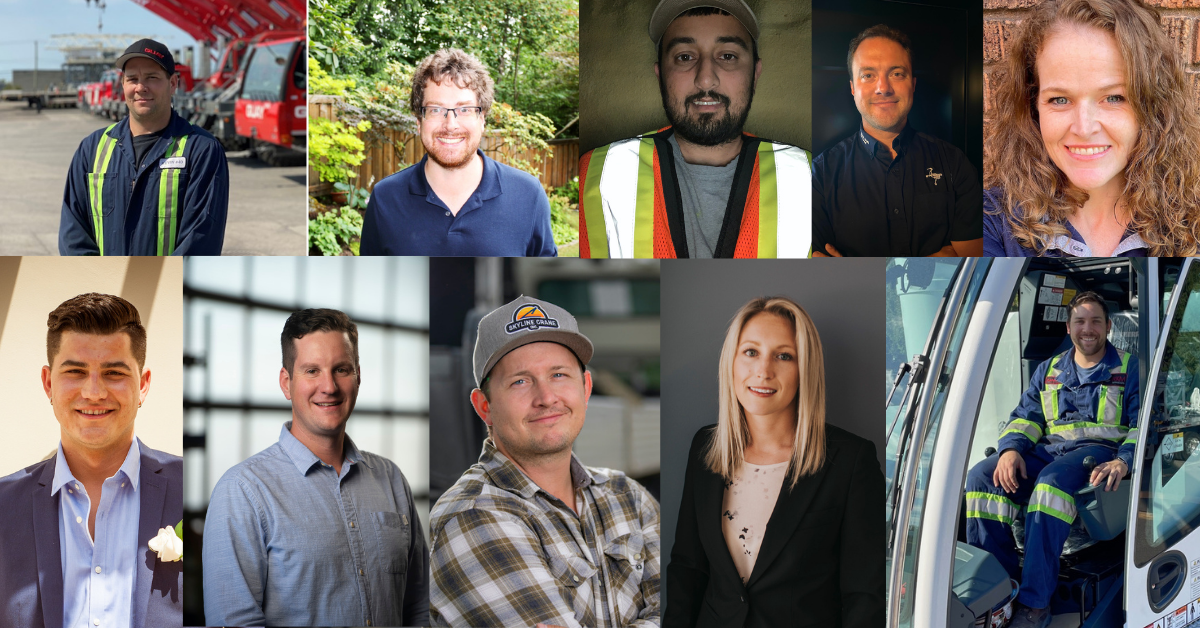 The future of the heavy lifting industry looks bright. Armed with a strong work ethic, initiative, curiosity, and a commitment to training and safety, the 2021 winners of our Top 10 Under 40 program are setting the bar for young professionals across the industry.

Whether they work in leadership, operations, maintenance, sales or support, these crane and hoist employees are highly regarded by their colleagues, clients and peers.

Want to recognize a future leader? Nominations for the 2022 contest are now open. Congratulations to our 2021 winners! 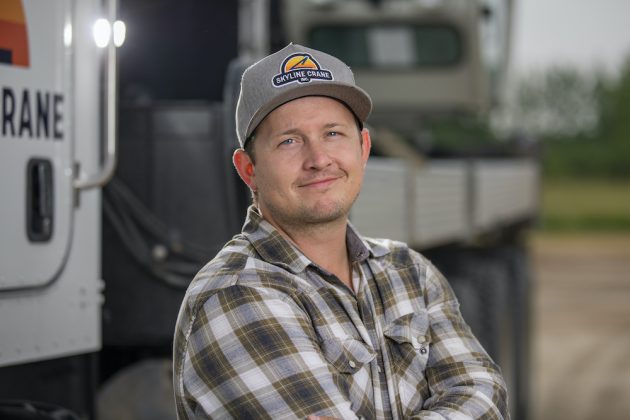 Throughout his career, Geurts, a crane operator and supervisor, planned to eventually start a business with his cousin, who was also his best friend. But after his cousin died suddenly and COVID-19–related lockdowns changed his job prospects, Geurts – who Grift describes as “a great friend, father and colleague” – mobilized to fulfill his long-held promise.

“He bought a shop, his first crane and began building a customer base one job at a time,” says Grift, who co-supervised a multiyear hydro dam project with Geurts. “To say he has had success, during a pandemic nonetheless, would be an understatement.”

Since then, Geurts has earned COR certification for Skyline Crane, as well as certification with Avetta and ISN, and hired eight people. He’s also a champion for his people, having unionized Skyline Crane with Operating Engineers Local 987 and supported the Red Seal training program to ensure trainees have access to learning opportunities.

Geurts, 37, “was able to channel his energy and turn it into a successful crane business in Manitoba that’s creating jobs, building trust with clients, and providing great and reliable work for his community,” says Grift. “He saw what needed to be done and he did it.” 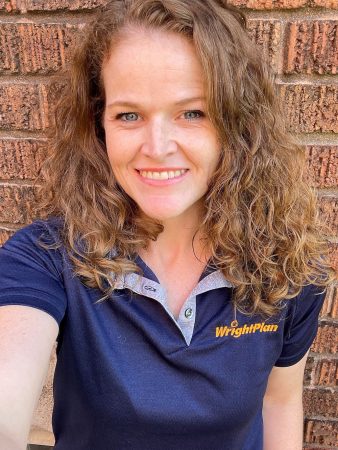 Nearly two decades in the construction industry have armed 38-year-old Erin Loveday with the skills she needs to succeed in project management.

She landed a job as a site clerk in general construction at Comstock Canada before she made the move to industrial services at the Axiom Group of Companies, where she worked for 14 years.

“Her hard work and determination saw her rise from payroll all the way to project management, overseeing the opening of new company locations across North America,” says Adam Gall, who currently works alongside Loveday at WrightPlan.

An unwavering commitment to support is what makes Loveday stand out among her peers, says Gall.

“Erin loves sharing her knowledge of industry best practices with customers, taking great pride in the relationships she forms along the way.”

Garrett Ewasiuk can spot the small stuff, which is what makes him so good at his job as a crane and rigging supervisor, says Drew Ferris, operations manager at Ewasiuk’s employer RKM Crane Services Ltd.

“Garrett’s attention to detail while ensuring the safety of crews, equipment and the public is one of the reasons that we as a company have been so successful and recognized in the industry,” says Ferris in his nomination.

At 29 years old, Ewasiuk has worked his way from apprentice to Red Seal mobile crane operator to supervisor thanks to his studious nature, which his peers see in his in-depth reading of crane manuals and his on-the-job learning from senior operators.

Now, in addition to inspecting machinery and equipment, he provides onsite logistics for rigging projects.

“Over the past four years Garrett has nearly perfected the art of assembling our cranes, dismantling and erecting various models of tower cranes, and dismantling our equipment safely and efficiently in tight quarters,” notes Ferris. 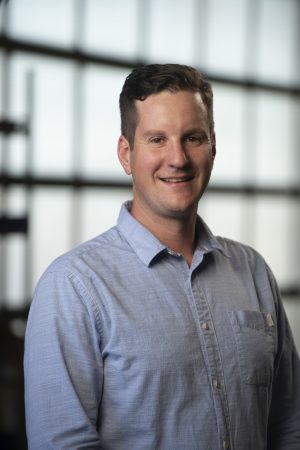 At 35 years old, Andrew Phelan is a phenom in the sales department at Hoisting Overhead Cranes, says Doug Clark, president and CEO of the company.

“As a result of his relentless pursuit of excellence, Hoisting has developed trusting relationships within the LNG industry in Canada – completing two major projects, and delivering seven overhead cranes, 12 monorail systems, and 10 jibs over the past 12 months,” Clark says. “Andrew’s unwavering commitment and dedication has allowed Hoisting, a private Canadian-owned company, to proudly compete on a global basis for these large projects.”

Phelan’s portfolio includes overseeing all domestic and international manufacturing sales at the company, which specializes in custom crane solutions. In addition to LNG, he’s also made inroads as commercial and executive liaison for engineering, procurement and construction clients.

“Even in an economic downturn due in part to the COVID-19 pandemic, Andrew was instrumental in pivoting to a business model that’s conducive to survival, long-term resilience and growth,” explains Clark.

Phelan applies his appetite for growth to his personal life too, where he volunteers as chair of the board for Oliver Centre, a local early-learning organization for kids.

“Andrew is well-respected by his peers and is a key part of the leadership team at Hoisting,” says Clark. 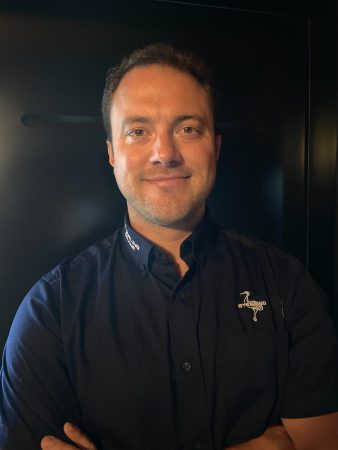 In his role as Sterling Crane’s branch manager for Saskatchewan and Alberta, Brodziak manages a large fleet of cranes as well as multi-million-dollar maintenance and capital projects for high-profile clients such as North West Water and Dow Chemical.

“Justin’s passion for excellence, along with a keen eye for detail, has resulted in outstanding safety records for his crews, as well as numerous operation efficiency accolades,” says DeRocco.

“Justin is a team player who takes great pride in his and his teams’ work, while ensuring each and every one of his colleagues goes home safe every day.” 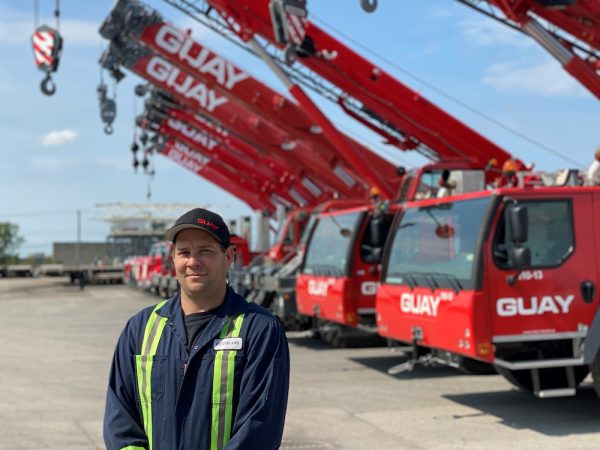 Kevin Bussières skidded up to GUAY by bicycle at age 17 to apply for a night shift mechanic job and has worked there ever since. By 23, Bussières had earned his trucking license so that he could hit the road with GUAY’s service units.

He spent the next nine years travelling the province, performing maintenance at wind farms, hydroelectricity dams, mines and bridges.

“Distance was never an obstacle, he was always willing to travel all over Quebec to repair cranes, even in remote areas,” says Jean-François Houde, Bussières’ director. “When he left a site, you can be sure that the problem he came to fix was solved – and probably even more [were solved] while he was there!”

Now 36, Bussières is stationed in Montreal at GUAY’s largest shop, where as garage superintendent since 2019, he supervises the activities of the mechanics, painters and welders on the fleet maintenance team. He also coordinates equipment buys for all branches.

“He loves to be able to work on new acquisitions and he is always the first to check them out when they arrive,” says Houde. “After nearly 17 years, he is still motivated and eager to go to work every day. His peers describe him as always available, patient and devoted to his team.

“If you run into Kevin, you will see that he always has a smile on his face too!” 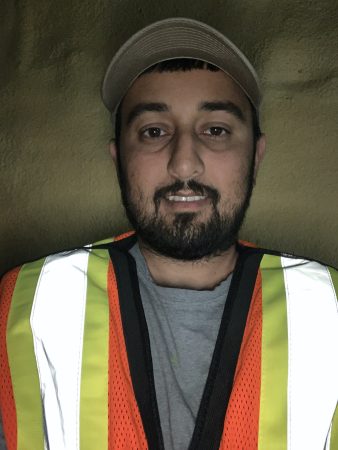 Manbir Bharj is no stranger to the hard work required to be certified as a crane operator. He earned his trucking license in 2008 when his dad bought a crane truck to install air conditioners.

Next, it was school at Durham College and a journeyperson certification as a commercial tractor trailer driver. In 2011, he completed a course to operate mobile cranes. In 2017, he achieved his Hoisting Engineer 339A certification. Now, at 34 years old, he’s currently working on his 339B, which will allow him to become a full-fledged tower crane operator.

“Manbir is a kind, hardworking individual. He is not afraid to work and is always helpful,” says employer Kuldeep Singh.

Singh credits Bharj, who is Punjabi, for getting more youth in the South Asian community interested in becoming a crane operator, because he’s always game to share his knowledge.

“He is willing to help and gives 100 per cent, always. He is a good listener and always is willing to listen to what others have to say.” 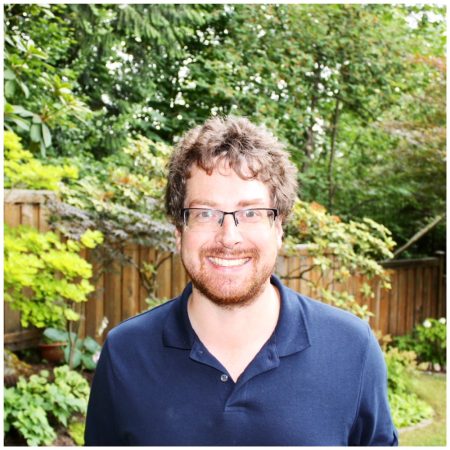 “Neil is not only a kind-hearted, likeable individual who has a good relationship with everyone he meets, but he is also an extremely knowledgeable ‘crane guy’ who enjoys spending his days (and some nights) planning and executing technical lifts,” says Drew Ferris, operations manager at RKM Crane Services Ltd. and MacPherson’s long-time friend and co-worker.

MacPherson spends his days leading the operations of crane rental house GWIL Crane Service, and, as a Professional Engineer, helps to produce lift plans and drawings. Ferris credits MacPherson’s “knack for AutoCAD and lift plan creation” for getting complex jobs figured out.

Some of those projects have included the turnaround of the Parkland (Chevron) refinery, the expansion of Neptune Terminals, demolitions of parkades, and tunnel boring machine installations and removals.

“Neil and I have worked closely to develop lift plans for cranes more than 1,250 tons, which required the most finite details to ensure safety and execution were looked after,” says Ferris. When he’s not busy making sure the job gets done safely, MacPherson, 36, can be found golfing, or cheering on his daughter’s hockey team as coach. 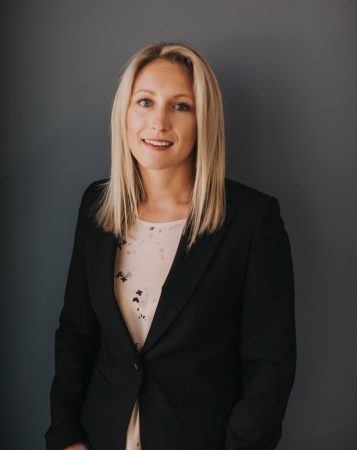 At 30 years old, Stephanie Hnatuk is already making a splash in the industry. She’s spoken at events, including our own Women in Construction event this past spring, and knows what it takes to work your way up — even in your own family’s business.

Upon completing high school, Hnatuk joined her parents and brother at Prairie Crane Group, first in office administration and then in the back shop, where she cleaned and delivered rigging.

After earning a degree in environmental engineering at the University of Regina, Hnatuk returned to the company to work full time. She started to learn more about Prairie Crane’s fleet, and the day-to-day operations of the business, eventually becoming operations manager.

“Stephanie stepped into the role fresh out of university, coming into a position in a very male-dominated industry,” says coworker and brother Matthew Hnatuk. “She grabbed the bull by the horns and has worked to look after the company and its many clients,” says Matthew. “She works long days and goes out of her way to make sure projects we are working on are well organized.

“She also keeps the 15 male operators in order to make sure our customers receive the best service.” 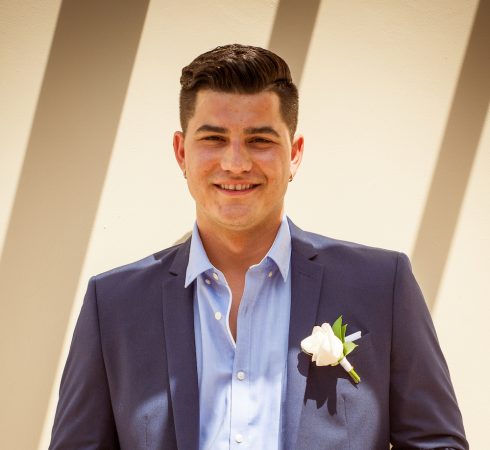 “[He’s] gone from a very young man with no experience operating, being around cranes or driving commercial equipment to being ABCO’s go-to operator,” she shares.

When Crawford’s husband and ABCO owner Devern Crawford suddenly passed away earlier this year, Willier, 35, stepped up to take on the role of full-time operations manager.

“Steven has jumped from our top crane operator to a management position and has done so with determination, dedication and a willingness to accept the challenges that lie ahead of him,” says Crawford.

“These attributes will serve Steven well as he continues to learn and develop his own leadership style.”

This article appears in the November/December 2021 issue of Crane & Hoist Canada. Read the digital edition.

Related
Deadline Sept. 30: Nominate a crane industry pro for our Top 10 Under 40!
Crane & Hoist Canada’s popular Top 10 Under 40 is back
Manitowoc adds two members to board of directors
Toronto tops crane count across North America
Tags