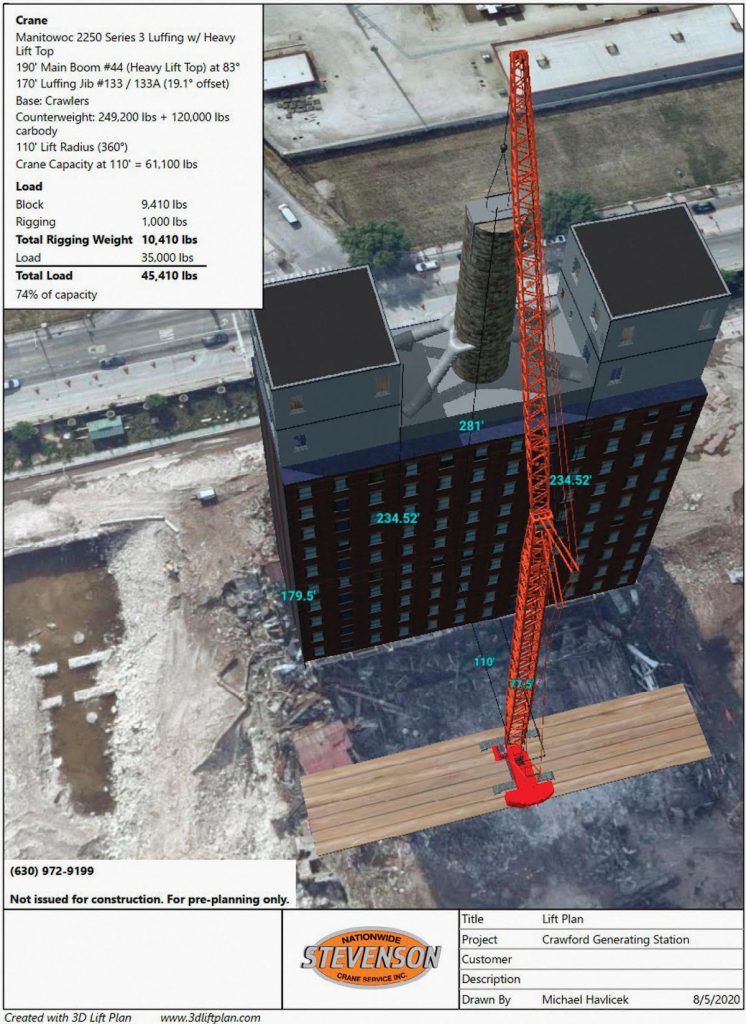 A1A Software has named the winners with the best lift plans for its 2020 Lift Plan of the Year awards.

“Ironically, all three companies are based in Illinois and serve the Chicago metropolitan area, despite the fact that 3D Lift Plan is used by lift planners all over the world,” said Tawnia Weiss, president of A1A Software. The winners were selected by popular vote.

Meanwhile, Stevenson Crane was tasked with the opposite scenario—dismantling the nearly 100-year-old Crawford Generating Station, a coal-fired power plant.

“A good lift plan takes out all of the guesswork and identifies any potential/costly issues before the crane even arrives on site,” said Michael Havlicek, lift planning specialist.

In both cases, 3D Lift Plan was a critical visualization and communication tool. For the Oak Brook Commons project, Pettrone explained.

“Tower crane erection is, in a sense, a construction site groundbreaking ceremony for all subcontractors. The tower crane is what enables all trades to safely do their jobs in accordance with a site schedule. By marrying 3D Lift Plan with a blueprint, La Grange Crane provided an accurate description of what the job site would look like, and how team members across many trades would coordinate,” said Pettrone.

“One of my favourite things about 3D Lift Plan is just how easy it is to overlay a scaled satellite image of a jobsite into the project. This gives the Owner/GC/customer a visual aid for how a crane will look on their jobsite, and it also gives the project manager from the crane company the ability to show the operator and crew where a crane (and necessary matting) will need to be setup for a successful lift,” said Havlicek.

3D Lift Plan is also handy for contractors who need to work closely with a crane vendor, as Area Erectors did with Nichols Crane Rental at Downers Grove North High School.

Crane placement options were limited at the school in a residential neighbourhood, where a shop-fabricated steel truss was to be placed in a courtyard. Area Erectors initially used 3D Lift Plan for crane selection with the vendor and in determining crane placement. Later it was used again to review the rigging and lifting scenario, which required offloading the truss, standing it up, and then laying it over to rig.

“The standing and rolling process was reviewed with the crane rental company and the operator tasked with the job,” said Brent Genseke, project manager and structural steel estimator.

To see these winning lift plans and the other finalists, visit www.3dliftplan.com.