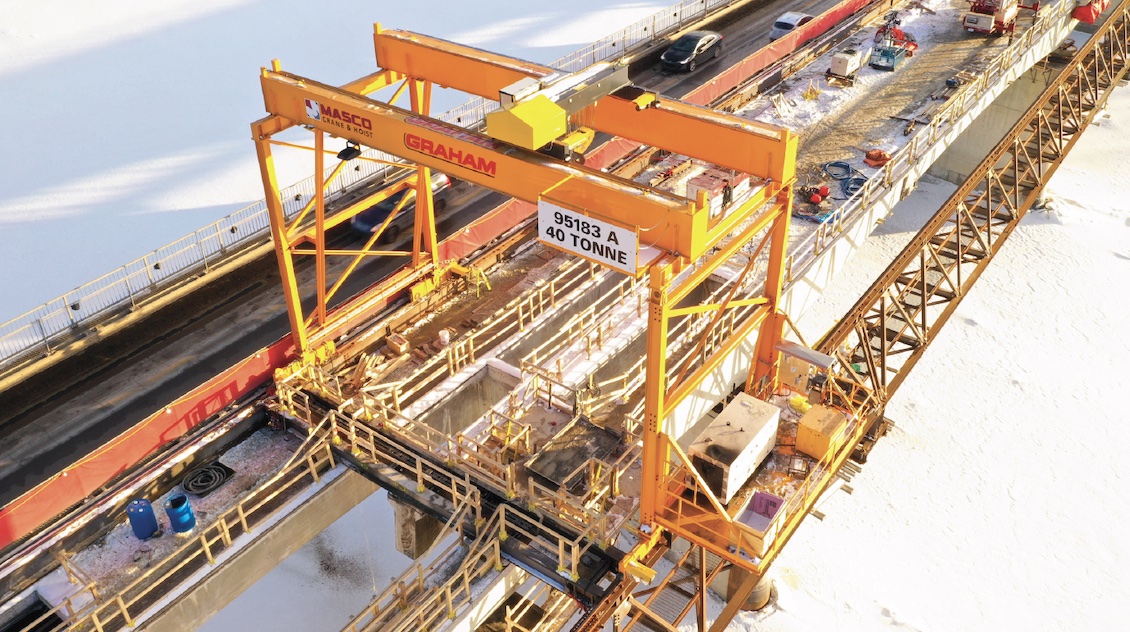 Despite approaching the end of its service life, the city wanted the nearly 65-year-old, 330-metre-long four-lane bridge forming a critical transportation route over the North Saskatchewan River repaired rather than replaced.

The entire superstructure’s deck, girders and portions of piers and abutments – 13,000 tonnes of concrete – was to be demolished. Traffic normally averaging approximately 40,000 vehicles per day had to flow throughout construction. Widening of the shared use path from 2.4m to 4.2m on the bridge was completed to meet the city’s requirements. In-stream work faced regulatory hurdles including schedule restrictions for fish spawning, and physical constraints to how much of the river could be impacted at any given time. And the project needed to be completed in under three years.

Although many factors and people contributed to the project’s completion on-budget at $45.6 million and within the 33-month schedule, Graham Construction’s successful execution hinged on a bold temporary works innovation conceived before the project even began. In brief: the superstructure demolition and reconstruction were completed from above instead of below. There, project execution centred on a custom-designed and constructed, rail-mobile gantry crane system – the first such solution ever used in Canada.

“The process amounted to sawing the old bridge down the middle, repairing one half of the bridge, keeping two-way traffic open on the other side, then flipping the process and repeating,” explains Jim Murray, the City of Edmonton’s Project Manager. “This was no easy task, people driving by don’t realize how complex it is.” And, continues Murray, “In the first half we struggled, this was something new, it was quite stressful because we knew if we didn’t get that first half flipped over for traffic, we weren’t going to be successful.”

In addition to the river bridge itself, the contract called for rehabilitating two bridges, one to the north of the river and one to the south of the river along with the rehabilitation of 5 km of roadway and on/off ramps. The City had previously selected DIALOG as designer and engineer of record, and the firm would later remain on-site through contract administration. Graham was selected as general contractor in January 2018 based on a combination of price and relevant experience. “On a project with this kind of complexity and risks – a critical river bridge in the centre of Edmonton – we don’t hire somebody for whom this is their first try at it,” notes Murray.

All photos courtesy of Graham Construction.

The work on Groat Bridge required a more extensive rehabilitation than Crowchild. Before landing the contract, Graham had identified regulatory and schedule risks associated with the use of in-stream access to perform the major rehabilitation activities. Fish spawning windows would significantly reduce the available in-stream construction periods. The initial concept was to have four phases of in-stream berm during allowable construction periods, dividing the project into quarters.

Fortuitously, a Graham employee attending an industry conference met an acquaintance from COWI North America, Ltd., and the two began brainstorming, explains Melissa Jennings, the COWI engineer who performed design work on all of the major temporary works. In a historic photo of a previous construction project, the COWI employee had noticed a gantry crane system being used to build a bridge. Could this be done on the Groat project, enabling year-round construction, uninterrupted by seasonal and regulatory constraints?

The two companies had worked extensively together in the past, notes Grundke. “They are really receptive to coming up with solutions that are conducive to construction, the people there are very practical, they understand construction and they tailor their designs accordingly,” she notes. Now, Graham brought COWI in as construction engineer on the Groat project, and the two teams set to work.

What took shape was an arrangement of two mobile gantries, each with 40-tonne capacity, mounted in tandem. They could be used individually to lift up-to- 40-tonne bridge deck panels, or together to lift 80-tonne sections of the bridge girders. The existing bridge was comprised of seven spans and six cast-in-place girder lines; three girder lines were to be removed in the first phase. The gantries would run on two parallel supports. One was the “runway beam”, a large, very strong temporary steel girder placed overtop of the old bridge’s middle girder and running the length of the bridge. The other was a triangular truss placed outboard and supported by steel brackets which were tensioned across the pier using high-strength rods. 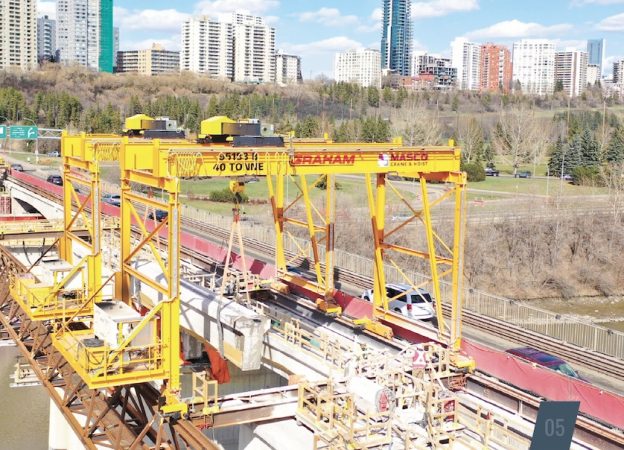 “It became an iterative process,” recalls Jennings. “Senior engineers would sketch out what it could look like, then we had internal discussions, then we reviewed it with the contractor to make sure it was feasible, each iteration improved it.” She describes this process as “highly collaborative. I felt like I really gained a lot being able to work with Graham.”

Getting the runway beam, truss and bracket system installed and running was a large part of the overall project. There were many technical constraints involved in installing the system including accommodating the existing geometry of the bridge to “fit” the support system accommodating the bridge’s existing design which included rocking piers and hinges in the existing girders, as well as critical tolerances for the rails and gantries, anchorage of the pier brackets and runway beam without conflicting with existing rebar, plus concerns about the bridge’s deficient shear strength. And, of course, it had to remain open to traffic. The design package analyzing the impacts of the runway beam on the existing bridge girder over which it would be placed alone ran to 1,000 pages. “It’s a simple concept to understand, but there were all these different pieces involved, and designing it to handle the large loads during demolition was quite complicated,” Jennings explains. “It became a weirdly elegant solution that was quite challenging to carry out.”

“This was a huge deal,” agrees Murray. The gantry scheme required review and approval by the director of the city’s Integrated Infrastructure Department. The gantries needed to remove 400 pieces of concrete of up to 80 tonnes each according to a prescribed order of removal aimed at maintaining the bridges structural integrity through all stages of the process.

“First we cut the concrete deck between the girders and lifted those pieces away using the gantry cranes, and then would cut and lifted the girder pieces out,” recalls Grundke. “The sequence followed to remove the girder segments, at times leaving unbalanced girders cantilevered over the river, so we would secure these with ‘strongback’ steel pieces anchored to the gantry’s support steel.” Demolition took about four months for each phase, much of it in the winter. “In addition to staying below the 80-tonne combined capacity of the cranes, we also needed to control the sequence we picked each piece to ensure that loads transferred to the support system were as designed,” notes Grundke. “Many of the girder lifts were near the cranes capacity by design. It was critical that our team treated every lift as seriously as the first one.”

Phase I demolition was very challenging, recalls Murray. “As they started removing pieces of deck, we found the deck was delaminated in places, so we needed a new plan to get the deck panels off in one piece,” he says. COWI developed a new plan to revise the anchoring of the panels.

Importantly, the gantry crane approach proved sound and, with experience and adjustments, the work became more efficient. Consequently, says Murray, “The second half was far smoother and easier. We had learned lessons, so we were prepared for everything, plus we had half of the bridge rebuilt which was much stronger than the original.” To further protect the river below during the actual concrete cutting, Graham installed a mobile containment system beneath the bridge to catch the water/concrete slurry during cutting. The concrete slurry was vacuumed and filtered and then reused for subsequent cuts.

The gantry cranes remained active during reconstruction, which included hauling rebar, formwork, the new steel girders, and other heavy loads. Graham’s innovative work sequencing saved time by having the false deck formwork, and rebar installation commence immediately upon placement of each span of new girders, rather than waiting until all seven spans were fully installed. That too, notes Jennings, “Required a lot more detailed calculations of where one expects the steel to be, elevation-wise, rather than just measuring the girders once installed.” But the significant time gained proved well worth the added effort.

In October 2020 the refurbished Groat Bridge officially opened on-schedule, with a large ceremony and news media present, delivering a great result for the City of Edmonton and the millions of motorists, cyclists and pedestrians who will use it over its 50-year rated lifespan. Graham’s runway beam was later sold, with parts of the truss repurposed for the Kicking Horse Canyon project at Golden, B.C. Graham has been asked to speak about the gantry-crane approach at several industry conferences. Sums up Grundke: “It not only helped us meet Edmonton’s contract requirements, but it was very beneficial from an environmental standpoint; completing major demolition and reconstruction activities from above significantly reduced impacts to the North Saskatchewan River and its users.”

(this article is drawn from a Graham Construction Case Study)