A hoist, human cargo and water are a mix requiring special fail-safe systems 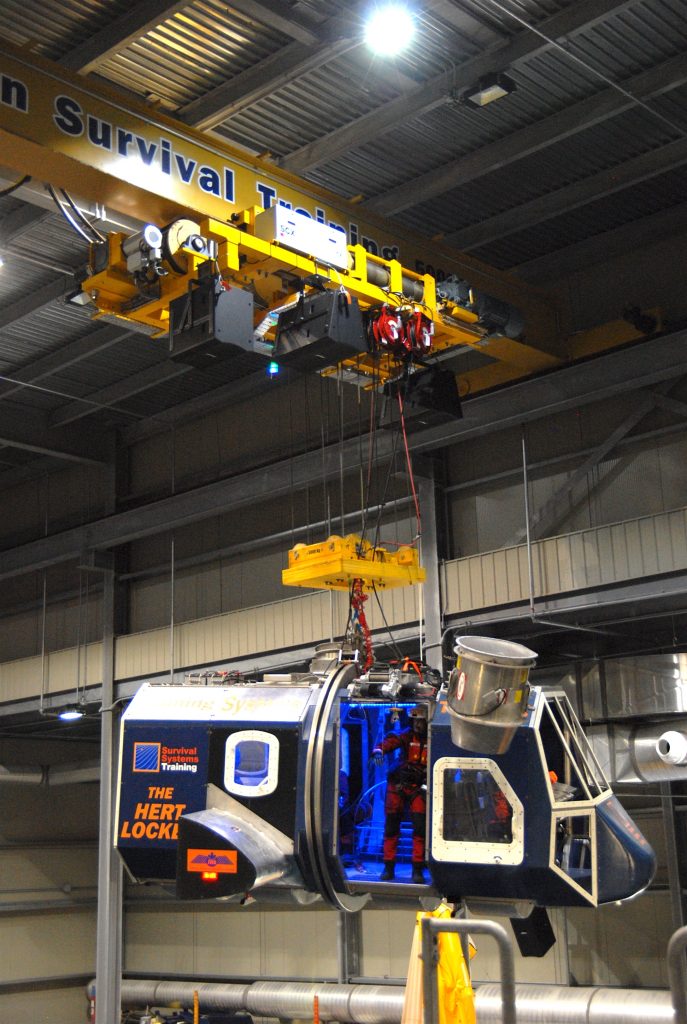 The hoist moves the Helicopter Underwater Egress Trainer over the pool for a search and rescue training session. The backup battery pack is in the silver box.

Learning how to survive a helicopter ditching into the ocean is best done under realistic conditions. In aid of this goal, Survival Systems Training Limited (SSTL) in Dartmouth, N.S. dunks trainees in a helicopter trainer, suspended from a specially designed hoist. Its designers left no room for failure.

This hoist is suspended under the roof of a 43-metre by 27-metre building, completed in 2014, called the Marine Aviation Survival Training facility (MAST). Mounted on a beam and girders, it can maneuver SSTL’s Helicopter Underwater Egress Training simulator, or HUET, over portions of the poolside deck and the 25-metre by 14-metre by 5-metre deep pool itself. The hoist sits roughly 13 metres above deck level and 14 metres above the pool’s surface.

“It is certified as being fit for purpose and was the first and, at the time of install, the only designed-for-purpose HUET hoist in the world. We worked closely with SCX engineers so the system was designed in such a way where we would not need to ever replace the hoist in the MAST, that our clients would feel safe sending their personnel for training, and that the hoist would be the new standard for hoists needed for underwater escape training all over the world,” says Jacob Elliott, acting maintenance and operations supervisor with SSTL.

SCX Special Projects, a division of U.K.-based Street Crane, designed and manufactured the HUET hoist, including the electrical systems. Seftec, a manufacturer and provider of training equipment, including HUET and firefighting simulators, originally contracted SCX on behalf of SSTL.

The hoist is certified by Lloyd’s Register as being fit for the purpose of conducting HUET operations. The hoist meets, and generally exceeds, regulations and requirements in Canada, the industrial sectors serviced by SSTL, and industrial best practices.

SSTL also uses the hoist for other aircraft-specific underwater egress training programs, with a client list that includes Environment Canada, the Canadian Coast Guard, the Department of Fisheries, the Canadian Armed Forces, Canadian/HNZ Helicopters, and TRS Canada, among many others.

For example, SSTL can add hardware to the HUET to replicate the inside of a Sikorsky S-92 Search & Rescue helicopter, complete with seats, hoist, communications systems and powerful fans that create a wash like that of helicopter blades. Configured in this way, TRS Canada leases MAST time to train search and rescue specialists in a realistic ocean environment.

“The hoist has two side-by-side reels on one wire rope system. The rope is anchored at both ends, on each reel, and the wire is fed through a four-point trolley for more stability and to minimize or eliminate any horizontal movement,” Elliot says.

From the primary operating station above and to one side of the pool, the hoist operator has full control of the hoist, as well as the MAST environmental effects, including wind, rain and waves.

The hoist has several key safety features: mechanical overload tops out at 110 per cent of the SWL. In the event of an overload, only the hoist lower function can be used. There is no single point of failure throughout the hoist arrangement, including the wire ropes and block.

One of the features of the HUET is its ability to roll upside-down, recreating what top-heavy helicopters are prone to do after landing on water. As trainees are at their most vulnerable at this point in a training session, SCX built in a battery-operated backup system that the hoist operator can use if there is a power failure at exactly the wrong moment: It will raise the HUET and return the trainees to a safe area.

The auxiliary lifting system consists of 10 deep cycle gel-filled batteries in a box mounted on the hoist.

“If there were a total power loss in the building, SSTL can still raise the system out of the water with a fully redundant hoist cable and evacuate any trainees and instructors that would be underwater during a session,” Elliot explains.

The backup hoist cable also ensures that if there is a main hoist failure or power failure, it cannot drop the simulator or trainees at any time.

O’Brien Material Handling, based in Memramcook, N.B., assisted in the installation of the girders along the long walls of the MAST, the transverse beam that travels along the girders, and the hoist itself. O’Brien is also the OEM-specified maintenance and service provider for the hoist system. This includes supplying replacement parts, and visiting SSTL to inspect the hoist’s electrical and mechanical systems in the MAST, and for the other HUET hoist SSTL uses in its other training building. Some components are inspected quarterly and others annually.

Some SSTL staff are also trained to carry out inspections before each training session, and to do monthly visual and function tests of the hoist systems.

The hoist moves the Helicopter Underwater Egress Trainer over the pool for a search and rescue training session. The backup battery pack is in the silver box.