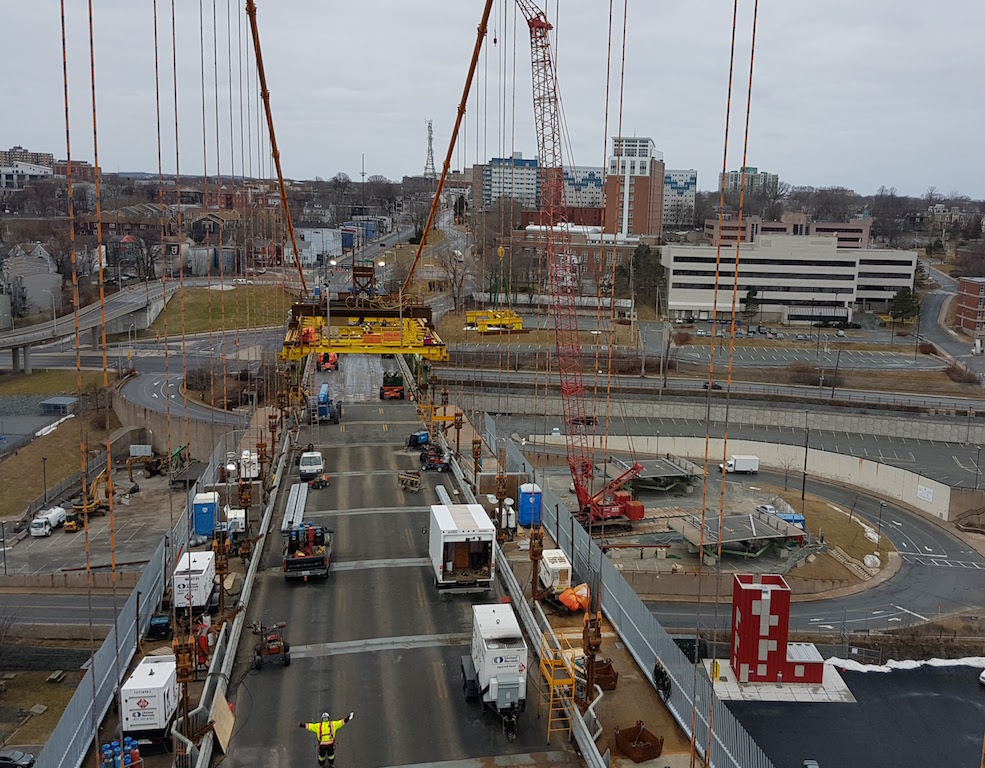 Rehabilitating “the old bridge” connecting Halifax and Dartmouth, Nova Scotia, is such a huge undertaking that it has earned the nickname “The Big Lift.”

Befitting that title, the $200 million project to refurbish the Angus L. Macdonald Bridge, a suspension bridge erected in 1955, has required the lifting power of several cranes.

“Our rentals came from local outfits like A.W. Leil, Irving, and All Canada,” said John Callaghan, project manager with the American Bridge Canada Company, or ABCC, the general contractor on the project.

A.W. Leil provided ABCC with a Grove Yard Boss Carry Deck, a Grove RT 540 and a Grove TMS 9000E. Two big crawler cranes were utilized — a Liebherr LR-1400 provided by Irving and a Manitowoc 16000 from All Canada. A second Manitowoc 16000, owned by Cherubini Metal Works Ltd., was utilized, as well as a 70-ton Mantis owned by RMI Marine Ltd.

Each crane was responsible for a variety of specific tasks (see sidebar).

The Halifax Regional Municipality began the project in 2014. It is scheduled for completion this fall. The structure has required a significant amount of work, including replacement of the deck and truss of the suspended spans, raising the suspended spans, and reinforcing the towers.

“The Macdonald Bridge is one of two suspension bridges spanning Halifax Harbour,” said Allison Currie, community engagement officer for Halifax Harbour Bridges. “They are major commuter bridges linking multiple communities with a daily average of about 105,000 commuters. The Macdonald is over 60 years of age and, while the bridge remained safe, the deck was wearing out and needed to be replaced. The Big Lift will extend the life of the bridge approximately 75 years and will reduce maintenance.”

Starting near the Dartmouth shore, the bridge deck panels were replaced on weekends in either 20- or 10-metre lengths. A lifting gantry was positioned on the suspender ropes and the existing panels were lowered to a barge in the harbour. The new panel would be lifted into position in the same manner. On the Halifax side, the panels were replaced over land because they were lifted by crane and moved by a self-propelled modular transporter provided by M&J Total Transport and Rigging Inc.

Second such bridge lift ever

“This is only the second time the suspended span of a suspension bridge has been replaced while open to traffic during the day in the world,” Currie said.

The first time was the re-decking of the Lions Gate Bridge in Vancouver in the late 1990s. Halifax Harbour Bridges has worked with the same bridge engineering firm from the Lions Gate re-decking project — Buckland and Taylor. ABCC was the contractor for that project as well.

On site work on the Macdonald bridge project began in mid-2015. In order to approach the work from the required angles, some of the work was accomplished by setting up a crane on a barge in the river below, said Fergal McKey, a field specialist with ABCC.

“RMI’s 70-ton Mantis was lashed down to the deck of the barge,” McKey said. “The tracks were restrained from moving. Ballast was added to the tanks of the barge to counter the weight of the crane.”

As of February 2017, all 46 segments of the bridge have been replaced. The remaining milestones left to complete for the Big Lift included finishing and reopening pedestrian and cycle lanes, replacing suspender ropes, finishing paving the Halifax side span, replacing expansion joints, and dehumidifying the main cables.