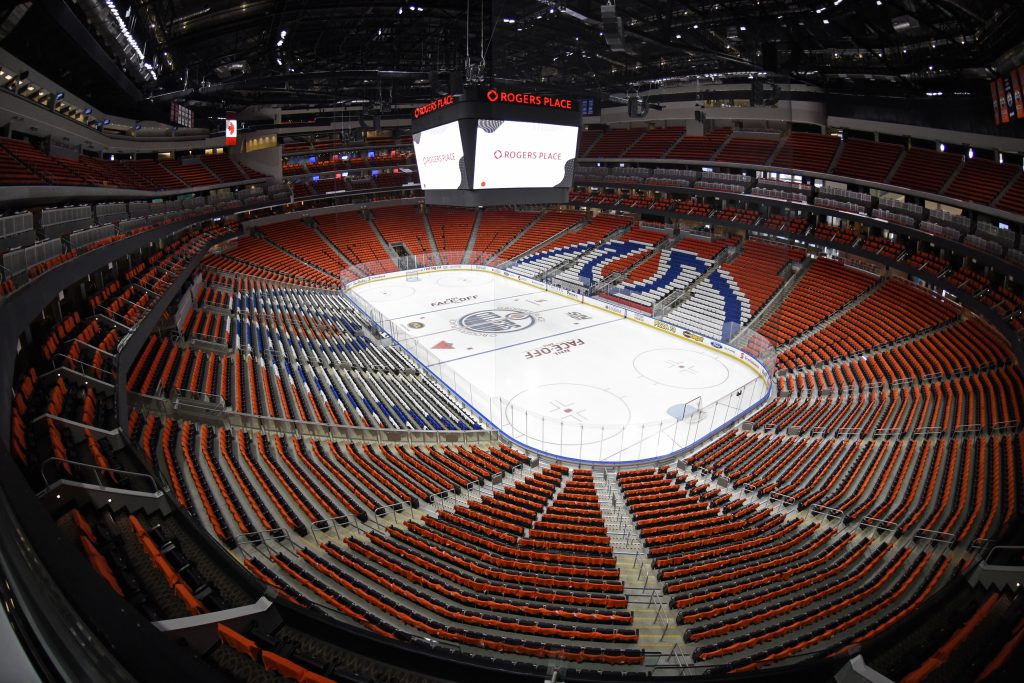 Here in the pages of Crane & Hoist Canada, we frequently talk about the crane and heavy lifting involved in the construction of facilities such as large arenas. But there’s also some significant heavy lifting that takes place after these venues are up and running. Hoists and winches play an important logistic role in allowing modern entertainment venues to serve sports events, concerts and everything in between.

Winnipeg’s Bell MTS Center is home base for the Winnipeg Jets NHL hockey team, but also serves as the venue for a variety of entertainment events throughout the year. Vice-president of facilities operations for True North Sports + Entertainment Ed Meichsner says the 16,345-seat arena has two hoist systems above the centre-ice position, run by a variety of Cone Drive and Vortek equipment. One hoist is in control of the score clock and video display often used for replays, penalty minutes and other displays depending on the event. Surrounding the top of the score clock is a large, round video board called “the Halo.” The Halo is connected to the second hoist system.

“They’re extremely important,” says Meichsner. “Because of where this video component and this big electronic piece of equipment hangs, it’s 80 feet above the ice surface. We can’t bring large pieces of equipment up there to service the unit. So we need to be able to raise and lower the center-hung and the ring for service.”

The score board and the Halo can be lowered all the way to the arena floor, so technicians can actually conduct maintenance or repairs standing on the floor. However, the optimal position for the board and the halo for a hockey game will not necessarily be ideal for other events. Large concerts, for example, will often have a lot of lighting, sound and staging equipment of their own to erect and Meichsner notes that they’ll often want to hang them up as high as possible. So the hoists are also used at times to move the roughly 65,000 lb. board and the halo up as high as possible to make room for event riggings.

“They usually like to hang concert grids up anywhere between 50 and 80 feet, and most center-hung score clocks hang below that or around the 50 foot mark,” says Meichsner. “So one of the challenges in a building like this with a large center-hung is when you do a show that’s in the center of your building, you’ve got to be careful. You have to make sure, before you proceed with putting in a new center-hung, that you take all that into consideration.”

Meichsner says that at one time there were plans to install a large round cap with a Jets logo on the bottom of the clock, but this would have significantly limited the versatility of the potential staging set ups, so an alternate logo display was developed. This allows major events like Kanye West, Metallica, the WWE or UFC to have the space they need for their event riggings.

The two hoist systems require careful operation and maintenance. The addition of a new remote control system makes the actual operation of the hoist easier, but still requires an engineer up in the rafters with the hoists to make sure everything is operating smoothly. They also have a policy that they never operate the hoist the day of a hockey game.

“If the hoist is going to fail, it’s going to fail while it’s moving right?” asks Meichsner rhetorically. “If we were to lower our center-hung to do some servicing the day of a hockey game, and for whatever reason that hoist failed and we couldn’t get it back up for the hockey night that could be a disaster.”

Edmonton’s Rogers Place has a similar set up center hoist system for the score clock. The roughly 20,000 seat home of the NHL’s Oilers features a J.R. Clancy hoist system which uses four synchronized drums, all responding to a Raynok remote controller.

“The system was put in in 2016 and it works very well for the score clock,” says Rogers Place Director of Production, Systems and Services Keith Hough. “We have some other chain motors that we use for raising and lowering a couple of curtains that we have in the arena. We have a number of chain motors that we can use to lower the truss for that curtain system so we can manage it. We also have a bowl divider curtain system. That operates the same way.”

The J.R. Clancy hoist system allows for much the same access as the Bell MTS Place system – engineers in Rogers Place need only a short ladder to reach the score clock when brought as low as possible. In this case, the decision of what hoist brand and system would be utilized was under the purview of the company that manufactured the score clock unit itself – Prismview, a subsidiary of Samsung Electronics. The system allows for a significant amount of control and customization.

“We have a computer controller, it’s not like a hand held pendant where you just push a button to go up or down,” says Hough. “There’s a whole control system that allows us to get really granular with the control of the clock where it sits. It’s nice to be able to have pre-set heights and to be able to enter a target height to set the clock at if we want to do something a little bit other than the norm. Two pairs of drums are mechanically synchronized with a common shaft between them. All four are synchronized through software. So the versatility of the software and keeping track of that is an advantage.”

Hough has been with the Oilers organization since they were in their previous home, the Northlands Coliseum, formerly known as Rexall Place. In that arena, Hough says, there was a hoist system used to raise or lower a mock oil derrick. The large staging piece would be lowered onto the ice each game and players would skate through it.

“That was a good example of using lift technology to be able to raise or lower a set piece for our pre-game opening,” says Hough. “We had lots of lights off of it and we had a lot of effects going on that derrick. It was a pretty cool, but times change.”

In 2018, the Avenir Centre opened in Moncton, New Brunswick. The $113-million, 8,800 seat facility is now the new home for the National Basketball League of Canada’s Magic and the Quebec Major Junior Hockey League’s Wildcats. Drew Watson, Chief Building Engineer, says that the arena has the standard hoist used to raise and lower the center-hung scoreboard, but also features a variety of smaller winches, which are used for safety netting on either side of the rink, as well as curtains that can be used to change the scale of the arena.

“Our center-hung is 16,000 lbs.,” says Watson. “So that hoist is rated for one and a half times that, just because of breaking once it’s in motion. The safety nets and the curtain are very, very small. Usually dual drums with one drive motor, and if I was to take a guess those are probably a horsepower or less – very, very small. The safety nets are under 1,500 lbs., the curtains, each panel is no more than probably 50 lbs. apiece. Really, that’s the only solution. Outside of that, in order to move these things up and down, you’d be looking at using cranes. Every center-hung I’ve seen has had a hoist and typically those end up being a lifetime item for a building.”

With the hoist being a lifetime item – and one that could be difficult to remove once installed – it’s important to choose the right one for the arena. Watson marvels that newer hoists, like the system in the Avenir Center, are much smaller, more easily serviceable and more reliable than 10 or 15 year old units he’s seen in other arenas. But that’s no excuse to get slack with maintenance.

“It saves you a lot of down time,” says Watson. “The last thing you want is a hoist to fail at three o’clock in the morning when you’re trying to load a show in. Being that we’re brand new, we institute at least a minimum of an annual inspection where all the limits are inspected, drums, anything for wear. Everything’s greased up as needs to be, gearing systems, etc. And then, typically every five years, that’s where we’ll end up doing some load testing and a little bit more intensive maintenance on all the hoists and what-not.”