Products & Equipment
Drones on watch: Coming soon to a crane near you 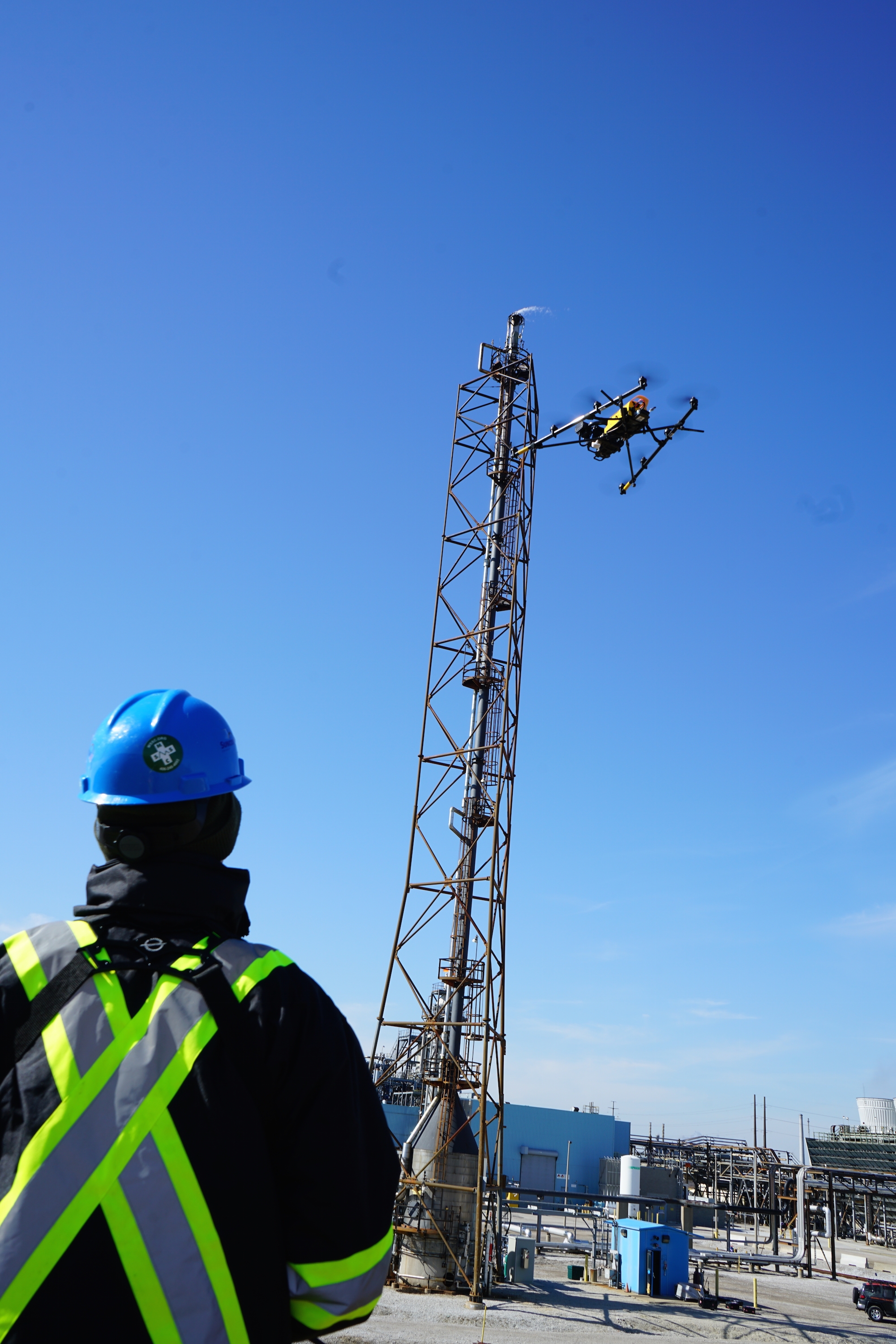 Imagine capturing video from a training session so prospective operators can literally have a bird’s-eye view of their manoeuvres; or no longer having to dismantle your crane and lay it on its side for inspection.

When we think about drones, a commonly conjured image is of teenagers flying them recreationally. Every so often, newspapers carry stories about close calls with aircraft, or users illicitly photographing their neighbours. Drones are used for search-and-rescue, three-dimensional mapping, storm tracking, even warfare. So why can’t they help us work with cranes?

Michael Cohen, president and CEO of Industrial SkyWorks, is a director of Unmanned Systems Canada, a drone industry trade association, and his own sights are trained on commercial uses. The company has already released BlueVu modules specifically designed to capture images of building exteriors and oil and gas facilities, to assist with their inspection. Last year, Cohen was approached about facilitating the use of drones to inspect crawler cranes.

“They’re forced to take these cranes down once a month for a visual inspection,” Cohen explains. “Imagine the time, cost, labour and lost productivity that goes with that. So we’ve engaged with one of the leading construction companies to design a drone-meets-software program for them.”

Users with BlueVu software on their computers can dispatch remote-controlled drones, just like the teenager next door. Except the optimal drone is built to commercial-industrial scale with a high-pixel camera designed to capture extremely strong resolution images from whatever vantage points are needed.

“The photographs are georeferenced and converted into three dimensional models,” Cohen says, explaining that an inspector can view the imagery using a computer or mobile device. “You would see anything that’s misshapen in the geometry, corrosion, cracks and broken welds — any distortion whatsoever to the integrity of the surface or the support structures. The drone collects the data, the software converts it into something that’s usable, and you can perform an inspection (on your computer).”

While Industrial SkyWorks already offers modules for building and oil-and-gas inspection, the version for crane inspectors is new enough that it’s still at the proof-of-concept stage.

“We’re actually flying [around] the cranes with drones, collecting data, and then proving whether or not that data is sufficient enough for visual inspection,” Cohen says. “The results are very promising.”

While the testing is currently being done with crawlers, Cohen says the technology should work with any kind of crane, including tower cranes.

“There could be an application for those, as well, but we haven’t been asked to do that.”

What is immediately evident is that drones should be commercial-industrial scale and not those meant for recreational flying.

“Your cellphone could take really good pictures of the crane, but the sensors with [high-end drones] could be 40 megapixel cameras that are taking ultra-high resolution imagery down to sub-centimetre level resolution,” Cohen says. “The best-in-class will have obstacle avoidance, so you could literally program the drone to say you want it to be 30 feet from the crane and no closer, or otherwise for safety because you’re on a job site.”

Could drones do more than supply high-resolution images for easy inspection? We asked, half-joking, if drones could deliver lunch to a tower crane operator or ferret things back and forth.

“Delivering lunch is certainly an interesting idea — I think that’s entirely possible,” Cohen says. “I can also imagine you could put a drone on-station and live-feed images to an operator. If you have a couple hundred feet out on the boom and you need to look at something, this might be an obvious way to do it.”

Shawn Galloway, an instructor with Atlanta, Ga.-based Crane Industry Services (CIS), says the training and certification company is actively exploring the use of drones to help with many aspects of crane work.

Drones equipped with visual and even thermal cameras could provide prospective operators, riggers and lift directors valuable overviews of a job site, Galloway says, explaining that mapping software could help determine the optimal placement of a crane for the safest, most efficient lifts.

“You can get down to the detail of where to put a piece of equipment for the lift all before mobilizing the equipment,” Galloway says. “Then, after a lift is planned, the drone could be used to verify placement based on the previous survey conducted by the crew.”

Drones could come in handy right before a manoeuvre or if a situation suddenly arises.

“On a tower crane you could fly your drone to check the cords and lacings of the tower and boom,” Galloway says. “If a tower crane has a collision and something needs to be checked very quickly, a drone could be deployed to do a cursory check. If there is no room to boom down a lattice boom or really any other mobile crane but a boom check needs to be made, a drone can be used to accomplish this without having to use a lifting device to get an inspector up there.”

For now, CIS remains at the exploratory stage. “Before CIS actually uses drones for inspections, parameters, skill levels and applications would have to be set into place,” Galloway’s boss and company CEO Debbie Dickinson says.

Dickinson says the company is working with the Georgia Institute of Technology on construction technology research that includes the use of drones, and their work may result in drafts of standards for drone use in construction and simulation systems for training personnel.

North of the U.S. border, Transport Canada regulates the use of drones, and new, updated rules governing issues such as privacy, public safety and operator training are in the works. <www.tc.gc.ca/eng/civilaviation/opssvs/proposed-rules-dronescanada.html>.

“Drones occupy and have the capability to occupy the same airspace as manned aircraft,” he says. “Training for advanced users can entail weather, airspace, airworthiness, rules and regulations, and a program of real flight time.”

Ultimately, Galloway sees drones as a natural fit for cranes.

“The construction industry has used aerial photography for decades in project planning. Drones, in the hands of skilled pilots who understand construction and machines, just make the job of the helicopter perspective easier and more affordable.”