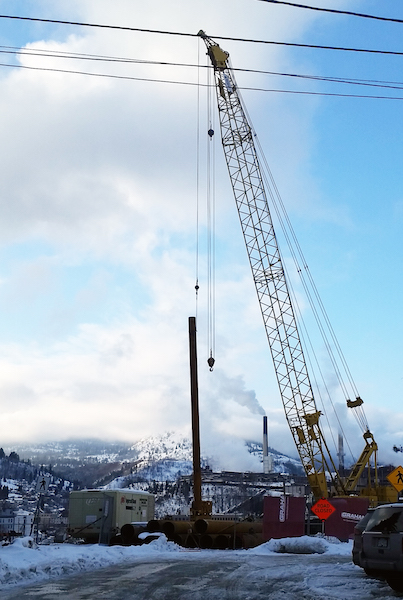 extensive planning and a custom built crane to get the job done safely.

A purpose built high-line will be used to construct a new walking bridge and sewage pipeline in Trail, British Columbia. The span crosses a fast flowing section of the mighty Columbia River, only a few miles from its confluence with the glacier-fed Kootenay River in southeastern B.C.

“Not only will this new signature structure accommodate the regional district’s sewer interceptor and a secondary water line, it will also connect our neighbourhoods with improved walking and cycling routes and enhance the overall look of our city,” said Trail Mayor Mike Martin, in an emailed statement.

“It’s a nice bridge. I’m just excited to get it going. It’s a decent sized bridge and we’ll be doing (the project) fairly quickly,” said James Scarborough, site superintendent for Calgary-based Graham Infrastructure LP, which won a $12.23 million contract to replace the bridge. Additional expenses related to the project will bring the total cost to $14.7 million, paid for by the City of Trail and surrounding municipalities.

Cranes used on the project, other than the high-line that’s being custom-built in Delta, B.C., are supplied by Gwil Crane Services in Genelle, B.C., a few miles from Trail.

“We’re going to be using quite a bit of cranes for some of the structural steel,” Scarborough said. “The main span of the bridge will be all flown in through a high-line crane system we’ve designed.”

The Columbia is a fast-flowing river that has carved a valley through southeastern British Columbia. Building over it requires careful attention to the geography because there aren’t many options for accessing the job site.

Part of the planning involves constructing temporary mats on platforms that will sit on top of two steel towers.

“To get to where the two towers are, you’re right on the river’s edge,” Scarborough said, adding that one of the towers is 200 feet tall while the other will be 170 feet.

“To get close enough to erect these things, it’s logistics — how do you get down? What size pads can we fit? How do we bring in steel components when there’s not a whole lot of room? Logistically, it’s an extremely tight fit,” Scarborough said.

The high-line crane will be used to transport workers as well as materials, which means extra safety measures and other specific requirements must be considered.

“Basically, anything that possibly could go wrong, there’s something we’ve done to prevent it,” Scarborough said. Safety features include anti-two-block and anti-collision systems and a system to ensure the load isn’t overweight.

“There are regulations you have to follow (regarding worker safety) and then there are also all your standard crane issues.”

This is Scarborough’s first time working with a custom crane of this size.

“It’s very unique, very exciting,” he said. “It’s just that a ton of planning has to go into it to make sure you get what you want. Once it’s designed, built and installed there’s not a lot of alterations that can be made. You have to get it right.”

Once the project is completed, the crane will be disassembled and some of the equipment, such as winch controls, will be salvaged for future use.

Trail spent $1 million from 2000 to 2010 trying to maintain the old bridge built in 1912, but it became apparent taxpayers were throwing good money after bad. Citing safety and liability concerns, the city closed the old bridge in 2010.

Significant deterioration of the piers and the steel shells surround them required rehabilitative work estimated at $10 million. At that would only have extended the life of the bridge by a few years. In contrast, building the new walking bridge will cost $5.8 million. When the regional government announced it was spending $7.4 million on a new sewage pipeline, the timing was right to combine the projects into a single span that will serve as a signature bridge for the community.

“The pipeline/pedestrian bridge is the city’s largest capital project to date and has great significance for our entire region,” Mayor Martin said. “We had very successful regional collaboration to bring this project to fruition and we look forward to sharing this amenity that everyone is sure to enjoy.”

In February, crews were finishing up ground work and concrete work. The entire project is scheduled for completion this fall.