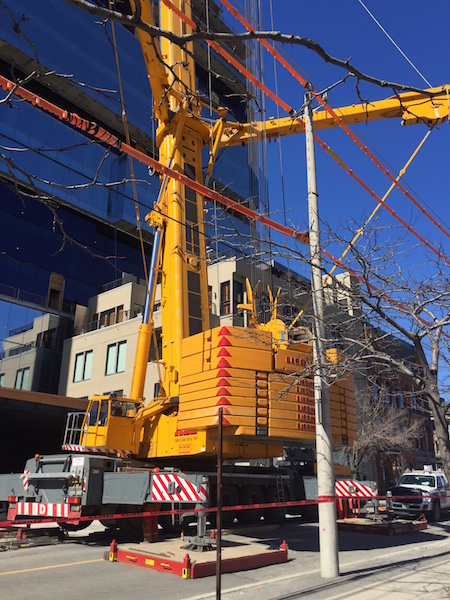 No news is good news for Toronto’s Globe and Mail

Tower crane take-downs are a regular occurrence in a city like Toronto, where a construction

So it was no surprise that headline writers weren’t needed when two of the machines were taken down in tandem from atop the building set to house the Globe and Mail daily newspaper over a three-day stretch in mid-March.

The Globe is scheduled to move from its current Front Street West location to the new Globe and Mail Centre, at 351 King Street East, later this year, along with other commercial and retail tenants.

“There were elements that could be removed within the confines of the construction site,” said Peter Nikolakakos, director of development with First Gulf, the site developer.

Crews set about removing the north crane, and by midday Saturday its boom was entirely gone. The cab and the remainder of the north crane came down on Sunday morning.

Crews then removed the mobile crane, carrying the various crane components away on flatbed trucks.

“Weather was a positive factor. Crystal clear, blue skies, no wind, and temperatures a few degrees above freezing.”

It’s not uncommon to use one tower crane that’s on-site to help remove another.

The Liebherr mobile took some effort to dismantle and remove. “It was such a large beast of a machine that they had to bring in the equipment on four or five flatbeds to take off all the counterweights and extra appendages,” Nikolakakos said.

Nikolakakos described the new Globe and Mail Centre as a 17-storey office building (height of 77 metres plus a mechanical penthouse), with a unique, irregular shape of cantilevered floor plates ranging from as large as 50,000 square feet to a more typical floor plate of 28.000 square feet.

“One crane on its own would not have sufficed for the entire building,” Nikolakakos said. “It was too large a span to have one crane touch both King and Front (streets). We needed to touch each corner of the property.”

Construction started in 2013, and the developer and owner are targeting LEED Canada gold certification.