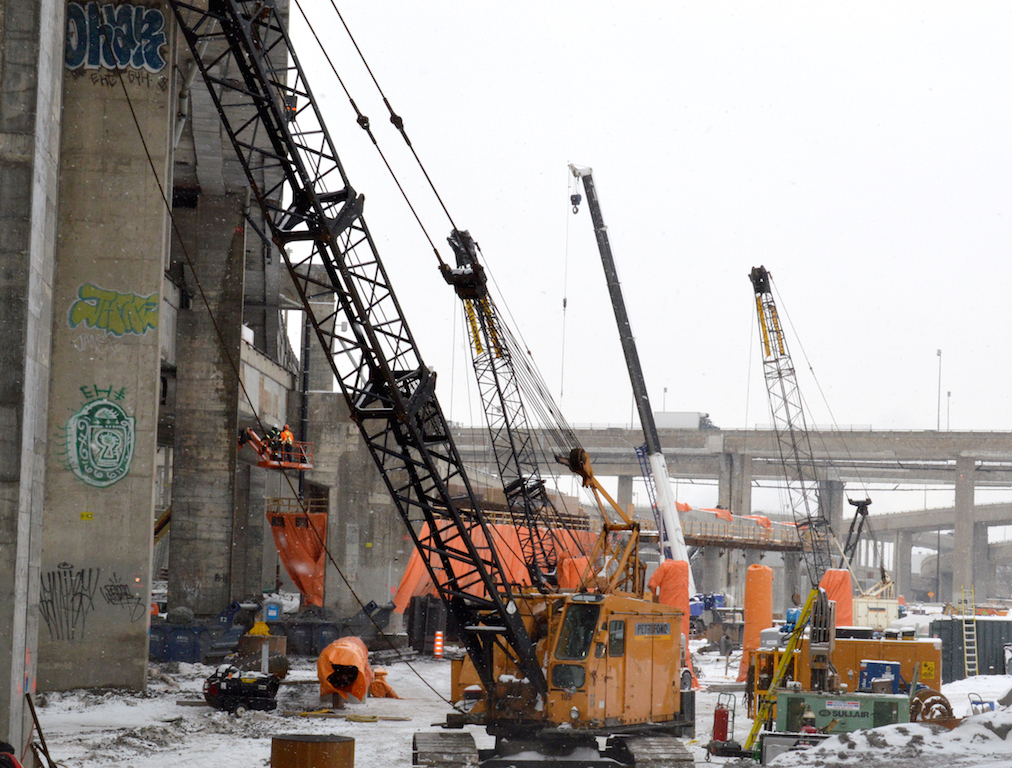 Work on the massive Turcot highway project in Montréal is involving many contractors and an array of cranes, including crawlers, boom trucks, a gantry crane and 600-tonne Demag.

The firm HBT-AIM Inc. was expected to bring the Demag onto the project in late February or early March to assist in dismantling a railway tunnel.

Transport Quebec began work on the Turcot project, the largest roadwork project in the province’s history, in 2015. It involves the rebuilding of the highway network and four major interchanges – the Turcot interchange, the Montréal-Ouest interchange, the Angringon Blvd. interchange, and the De La Vérendrye interchange. In 2020 the project will yield a new street — Pullman Blvd.

Among the interesting and challenging tasks is the dismantling of the railway tunnel in the Montréal-Ouest interchange sector.

“It’s a tunnel over the CN Railway,” said Simon Hébert, project director for HBT-AIM. “As part of the Trucot project, they have to remove the tunnel to realign the track. Our scope is to remove the entire tunnel without interfering with train service.”

Hébert said HBT-AIM’s work on the project consists of two sections. The first section is three precast concrete girders, which are an extension of the existing tunnel. The plan was for the Demag to perform 13 lifts over four days.

The second section consists of nine portal sections. They require the use of self-propelled modular transporters and a gantry crane. The gantry crane would lift sections of tunnel weighing 10,500 kilonewtons, roughly 1,100 tonnes.

“The obvious challenge is to work within the railway,” Hébert said. “It’s a closed in area. And we can’t stop any trains at all. There’s basically a train every 10 to 15 minutes. Via Rail is using this line, there’s a train every 30 minutes from Toronto to Montréal. There’s freight trains. The window to work is very short. And CN is, obviously, very picky about what we can do inside the tunnel because we’re inside the railway.”

The rest of the Turcot project will require extensive crane work as well. However, due to confidentiality agreements, Transport Quebec staff was unable to clarify details regarding which companies had been contracted and how they would perform their tasks. Transport Quebec was able to confirm that the project would utilize a 25-tonne capacity boom truck as well as a pair of all-terrain/rough-terrain cranes with 60 and 100 tonne capacities. A pair of crawler cranes, one with a telescopic boom, will also be used.

The cranes will perform a variety of tasks over the course of the project.

Crawlers, for example, will hoist moulded walls for caisson caps and prefabricated retaining. Rough-terrain cranes will install work platforms. Hoisting steel girders for the overpass will requires a combination of all-terrain and crawler cranes. A crane will be used for lowering workers and removing soil as the Haut Saint-Pierre collector is deviated, excavating a shaft for a new collector. A variety of cranes will also be used for dismantling and reconstructing the Saint-Jacques Bridge.