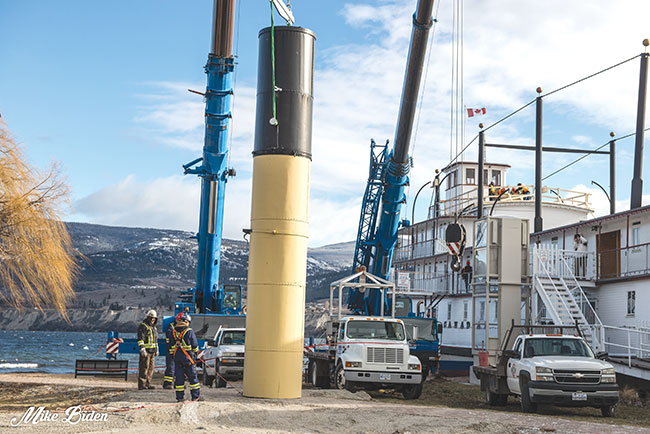 There was a big lift in Penticton, B.C., at the SS Sicamous. Crews used Liebherr truck-mounted cranes from Maurer Crane Service to remove the stack of the 105-year-old stern-wheeler after an inspection a few weeks ago found it in poor condition.

“We notified the city and they brought in an expert to check out the sickness of the stack,” said Adolf Steffen, SS Sicamous Society director. “They found it to be unsafe and could collapse at any time.”

The crews punched a hole in the top of the stack and ran a rod through it, which was then attached to the crane. The bottom of the stack was then cut free. Guide wires were disconnected and the stack was lifted in moderate wind, to a waiting truck on the ground.

The stack will need to be completely rebuilt. The City of Penticton, which owns the stern-wheeler, paid for the emergency work.

“We are very pleased with how fast the city has reacted to this,” Steffen said. “Everyone has come together.”

He said the stack was the original from the ship’s launch in 1914. Now that is has been removed, the SS Sicamous will be reopened to the public. It will be several weeks before the stack is restored, rebuilt or replaced.

Steffen said the city is still shopping around for the right shop for the restoration. The SS Sicamous spent 22 years in service, between 1914 and 1936, ferrying passengers to 14 stops between Okanagan Landing and Penticton.