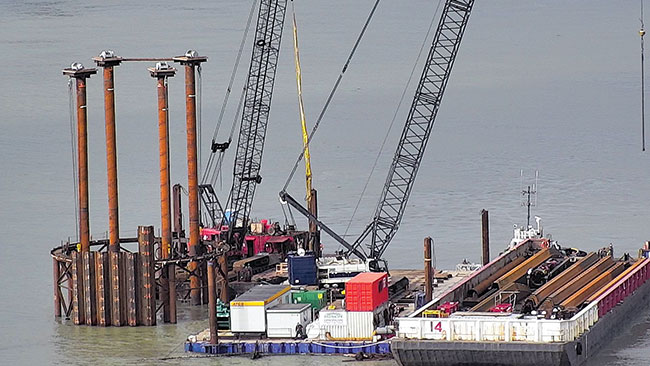 Some of Canada’s heaviest-duty cranes, working from land and water, are quarterbacking one of British Columbia’s most ambitious wastewater treatment projects.

Metro Vancouver manages wastewater systems for 23 member communities on the Lower Mainland and, with the population reaching three million and some facilities exceeding the half-century mark, the need for refurbishment and upgrading has been pressing. Factor in increasingly stringent environmental regulations and never-ending worries about a significant earthquake, and the sense of urgency is clear.

Multiple projects are in fact in play, each with their own work team and timeline. In North Vancouver, the new North Shore Wastewater Treatment Plant, slated to open in 2024, will replace the 50-year-old Lions Gate plant and add clarifiers and digesters to enhance treatment. Metro Vancouver has approved a comparable upgrade to the 57-year-old Iona Island treatment plant at the mouth of the Fraser River, near Vancouver International Airport. And the Northwest Langley plant, which currently serves 30,000 people, is being expanded to handle a geographically broader population of 230,000.

A signature piece, though, is work underway to reconfigure the Annacis Island plant in Delta, 20 kilometres inland on the Fraser River.

Annacis is one of the region’s largest wastewater facilities, processing 175 billion litres of effluent annually from 14 municipalities across the Lower Mainland, and Metro Vancouver is looking to enhance the level of performance and build a new outfall and diffuser to safely release the treated wastewater into the river.

While considerable work has been underway on shore with crews installing new clarifiers, aeration tanks and primary-level sedimentation tanks, a brand new $184-million high-capacity outfall and diffuser, slated for completion by 2024, is proving a magnet for heavy lifting.

Tunnel being built in two sections

The outfall will see 770 metres of tunnel dug through thick wet sand up to 40 metres underground. The tunnel, effectively a 4.2-metre (inner diameter) wastewater conveyance pipe, will be built in two sections.

With Mississauga, Ont.-based Hatch serving as construction manager, the tunnel and outfall have been contracted to a general partnership of construction giant Pomerleau and Bessac, a French tunnelling company. Bessac, in turn, has procured a five-metre-diameter slurry pressure balance tunnel boring machine (TBM), manufactured in its factory in Saint-Jory, France, with the machine’s front shield built in partnership with Herrenknecht in Germany. The TBM is equipped with a cutter-head, hydraulic propulsion rams and a precast concrete lining erector to protect the machine and workers from the pressure underground. The operator will even work from an air conditioned, soundproof cab. 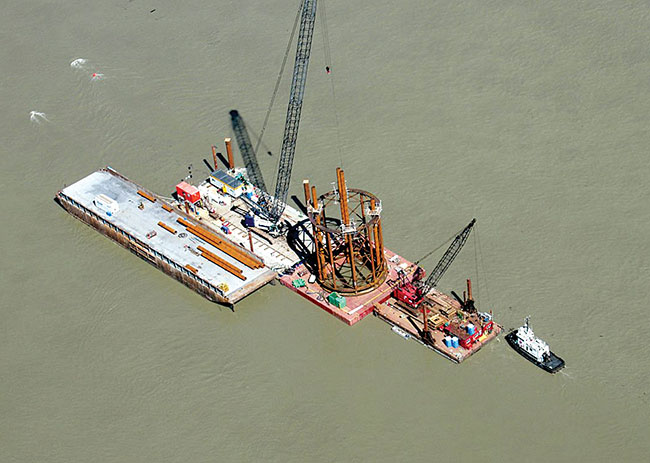 These barges, firmly anchored in the Fraser River to prevent movement, will support work on the outfall at Annacis Island. The moon pool barge moved the whaler structure (ie: template for driving of the cofferdam sheet piles) into place.

First, crews needed to build a shaft from which to launch the TBM on its underground mission. Teledippers, excavators with 30-metre telescopic arms and clamshell buckets, made initial headway. Then, Pomerleau-Bessac General Partnership used an FM Gru 2560 TCK tower crane able to lift 10 tonnes up to a radius of 18 metres to remove rocks and sludge from the shaft’s lowest reaches which the excavators couldn’t access.

The TBM arrived in pieces on board nearly two dozen trucks, and crews used a variety of mobile cranes ranging from 50 tons to a 500-ton Liebherr LTM 400-7-1 to begin assembly, tilt and place larger sections inside the shaft, and then complete the assembly down below.

Crews also used 200-ton and 250-ton crawler cranes in tandem to preassemble TBM shield components while the machine was still on the surface. Down below, the Liebherr LTM 400-7-1 helped with assembly at the outfall shaft and, as work proceeds, will help retrieve the TBM shield at the effluent shaft and reassemble the TBM at the outfall shaft to work on the second section of tunnel.

As tunnelling proceeds, crews are using the tower crane, working within an 18-metre radius to lower precast concrete ring sections weighing eight to nine tonnes to solidify and strengthen the tunnel interior and thus maintain its long-term integrity. The tower crane is also handling six-metre-long, 10-inch diameter pipes the TBM uses to dispatch muck and other slurry waste up to the surface for disposal. Materials are carried from the shaft to the TBM by underground battery locomotives.

This kind of lifting required nearly a year of pre-engineering and had considerable impact on the shaft design itself.

“We had to be very accurate to tilt those pieces (of the TBM),” Roux said. “The machine is worth something like $10 million, so you don’t want to break it.”

Project managers also needed to consider the hoisting capacity of locally available cranes when selecting the TBM because procuring cranes locally is much less costly than shipping them from elsewhere.

“The idea was to have a maximum size and weight of components so that we could manage those lifts with cranes (available) here in BC,” Roux said.

Crews also used the crawlers to assemble a temporary slurry treatment plant for processing the sand and muck the TBM is dredging while building the tunnel.

“It’s kind of like assembling a small factory,” Roux said. “The plant looks like an industrial warehouse and is nearly as complex as the TBM itself.”

The biggest lifts, however, are 150 metres into the Fraser River, where crews have built a steel cofferdam to contain the work environment and isolate it from strong currents, inland tides, floating objects and other hazards in order to install equipment to dispatch the treated wastewater. All construction within the cofferdam is completed in the wet, with most installations prefabricated and lifted in while divers conduct the lighter work. 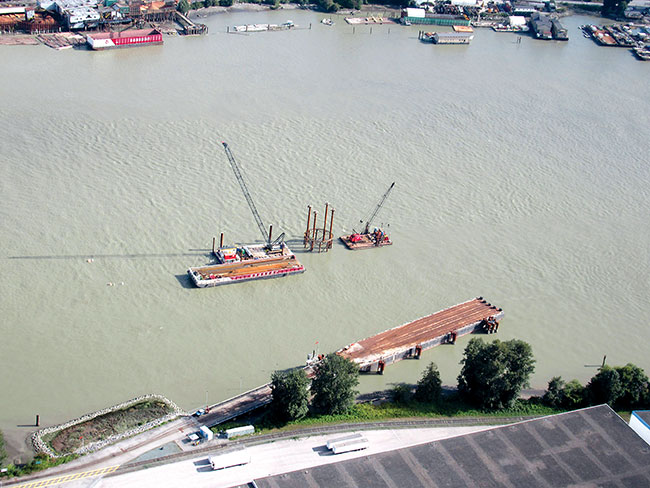 Crews used cranes working from barges to install the temporary steel cofferdam. The cofferdam will act as a form for the concrete used for the river riser and, at the same time, will help protect workers from strong currents, inland tides and drifting obstructions.

Ensuring stability of cranes mid-stream isn’t easy. Currents are so strong that work on the cofferdam was set back several months in 2020 when a late snow melt substantially increased the river flow, stirring up the sandy bottom and undermining the partially built structure’s integrity. Crews completed the cofferdam installation in February aided by crawler cranes perched atop massive derrick barges anchored firmly to the riverbed. A 300-ton LinkBelt 348 lattice crawler crane operating from one derrick barge placed steel sheet piles for the cofferdam while a second derrick barge with a 150-ton R30 Revolver crane handled logistics as a service crane.

Cranes working from barges will also place components for the diffuser. Daniel Hurd, a marine field engineer with Pomerleau, said many lifts are large and heavy, so items such as sheet piles are split into manageable lengths. Manoeuvres to drive sheet piles are particularly tight because loads can extend to 60 metres underwater, maximizing the Link Belt crane’s 240-foot boom capacity.

The river riser, designed to connect the outfall tunnel to the diffuser pipes in the river, stands to be the heaviest lift, at 250 tonnes once it’s encased in concrete and lifted into the cofferdam. Fabricated by Ideal Welders, the riser was placed on a moon pool barge and will be towed to site this summer.

The appropriate crane to lower the riser into place will be chosen when the time comes, but local heavy-lift derricks such as the 900-ton-capacity Dynamic Beast, owned and operated by Dynamic, and the 600-ton Arctic Tuk, owned and operated by Amix, could potentially handle such a job, though lower-capacity crawlers working in tandem might also be feasible, Hurd said.