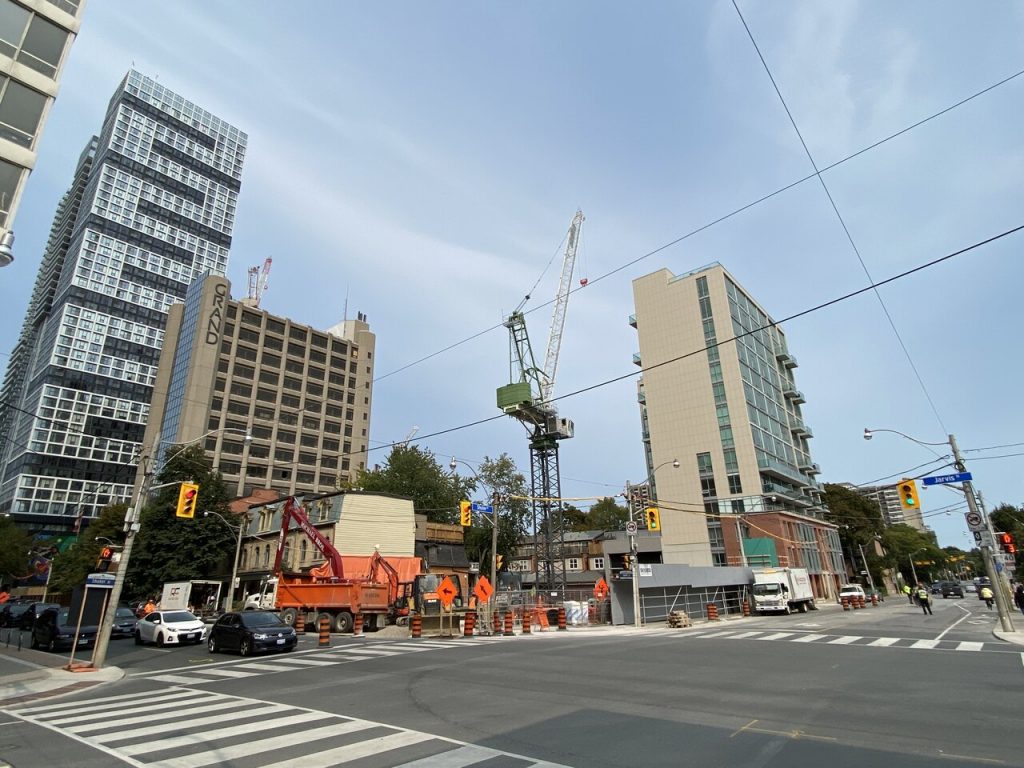 The Hyatt Place and 203 Residences on Jarvis Street in Toronto will be the first new hotel development in the area in several years. Photo credit: Sean Marshall

Construction is underway for a new hotel and apartment complex downtown Toronto – the Hyatt Place and 203 Residences, at the corner of Jarvis and Shuter. The building is tentatively scheduled to open in May 2023, but a crane has already been spotted on site as the building’s four underground floors are nearly complete and the erection of the building is ready to begin in earnest.

The project is being undertaken by Manga Hotels, a firm that builds, acquires and manages hotels in Canada and the United States. The actual crane work has been subcontracted to Toronto-based Limen Group.

The site will be the first new hotel development in the area in several years. Jack Landau, assistant editor at UrbanToronto.ca noted in a blog post that the Hilton Garden Inn and the Primrose hotels were recently lost, and that demolition was underway on the former Grand Hotel.

“Downtown Toronto has done very well the last number of years, but not much supply came into the market except for upscale, like the Four Seasons,” says Sukhdev Toor, president and CEO of Manga Hotels. “Nothing in midscale. Occupancy was very high and rent came up quite a bit, comparable almost to New York and Chicago and those areas. So, the demand was in downtown to build.”

Upon completion, the building will have a hotel on the lower floors and a residential complex on the upper floors with a restaurant, meeting space and other amenities that would be shared by both in the middle.

One of the complicating factors for the project is that the building is near the flight path for medical helicopters travelling to St. Michael’s Hospital. That was one of the reasons Limen Group were selected for the job, Toor says, because they had cranes that logistically could complete the job without going too high into the airspace.

“They’re going to use one crane up to a certain point and then they’re going to add another one,” says Toor. “They can’t swing very high, it has to be flat.”

Toor says that the cranes will be used both for the actual construction itself and also for moving workers and equipment around the job site.