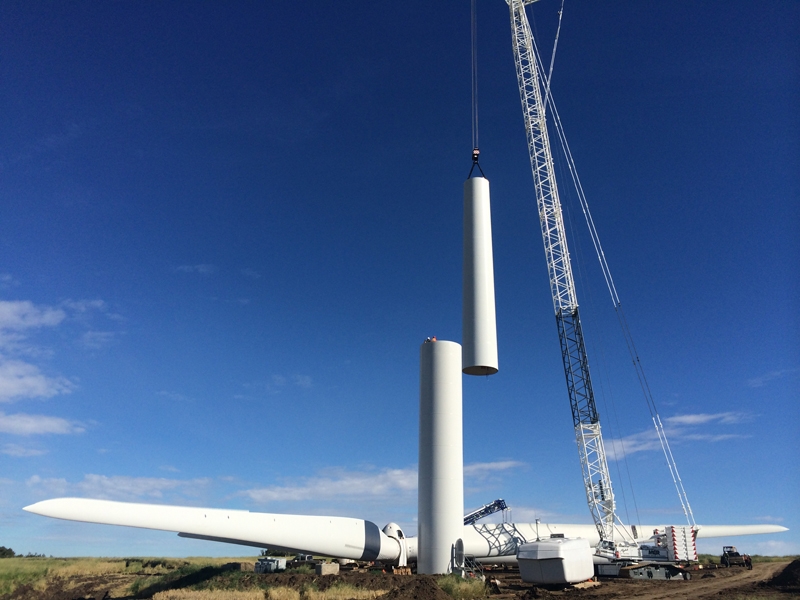 With the Alberta government opening the door to wind and other renewable energy projects, cranes could be in for some heavy lifting.

An Alberta government incentive program to support 5,000 megawatts (MW) of renewable energy capacity by 2030 has raised eyebrows in a province struggling with depressed fossil fuel prices.

A new report by The Delphi Group, commissioned by the Canadian Wind Energy Association (CanWEA), forecasts roughly $8.3 billion in new wind projects, with $3.7 billion spent within the province, if wind constitutes 90 per cent of the renewable energy supply by 2030.

Solar, biomass and geothermal projects are also eligible. But the Alberta Wind Energy Supply Chain Study , financed in part by the provincial government, estimates that if wind meets the 90 per cent target then the sector would contribute nearly 15,000 job-years of employment, $25.5 million in municipal property taxes and $13.5 million in land lease payments to landowners.

“There’s a real opportunity here,” said Evan Wilson, CanWEA’s regional director for the Prairie provinces. “A lot of the money will be going to companies, employees and industries that can move from being a part of the traditional oil and gas sector to participating in the wind supply chain.”

Many of the skills and occupations required for wind projects, including engineering, construction, operations and maintenance, are transferable from oil and gas to wind, Wilson said.

“If you have cranes previously used in oil and gas, there will be opportunities when it comes to putting up the towers, turbines and blades. And if you’ve done foundation building in the oilsands and traditional energy, there’s also the need for foundations with wind.”

While wind system features such as foundations require specialized design, the work is largely comparable.

“In the end it’s concrete and rebar underground to support something above the ground,” Wilson said, adding some companies with oilsands and other traditional energy facilities are participating in renewable energy competitions in Alberta, and also in Saskatchewan.

Wilson sees most wind-related activity happening in southeast and eastern Alberta, in areas such as Pincher Creek and Wainwright, where some 900 turbines already produce nearly 1,500 MW of generating capacity. While Alberta is home to some of Canada’s earliest commercial wind farms, the province currently ranks third in installed generating capacity, behind roughly 5,000 MW in Ontario and 3,500 MW in Quebec. But plans to add 5,000 MW in Alberta and 1,900 MW in Saskatchewan would be significant.

“With this ambitious plan from the Alberta government to get to 30 per cent renewables by 2030, we’ll likely see more wind in Alberta than anywhere else in the country by the end of this roll-out,” Wilson said.

Wilson said southern and eastern Alberta and southwestern Saskatchewan offer some of the best climate for wind generation in Canada.

“They’re not necessarily the windiest areas and they might not have the windiest single days,” Wilson concedes. “But what we need for renewable electricity is strong, consistent, predictable wind, and that’s where you’ll find it in Canada.”

Gareth McDonald, who oversees project development for Calgary-based BluEarth Renewables, said provincial plans should enable significant construction and maintenance work for cranes over the next decade or more.

“Every wind farm requires a number of cranes,” McDonald said. “You use everything from your smallest picker trucks and boom cranes to huge 1,000-ton-plus crawler cranes.”

McDonald said roughly a half dozen cranes could be active on a large wind site during construction.

“You’d have some unloading turbine parts from delivery trucks, and some setting up base sections which can be done by two smaller cranes,” he said. “Then you’d have another two lifting the rotor and the cell, which can weigh 60 to 90 tonnes, contain the generator and sit at 100 to 120 metres atop the tower.”

Crews generally use a rough terrain crane and a smaller crane to set components into place.

“It normally takes two cranes for a tower section,” McDonald said. “You usually have a crane at each end. The larger crane takes the lead and the smaller crane eases off and allows that tower section to become vertical so the larger crane can set it on the foundation.”

Towers generally come in 20-metre sections, each weighing 20 to 30 tonnes, and are stacked to achieve full height. Installation techniques vary. Sometimes crews assemble a turbine’s rotor on the ground by attaching the three blades to the hub and then hoisting the assembly as a single entity. Other times, blades might be hoisted individually and bolted onto the rotor hub.

The toughest challenge, Kettles said, is moving crawlers from one turbine or site to another when roads and pathways aren’t stable or wide enough or when power lines interfere. Often, crews walk a large rough terrain crane in front of a crawler to catch soft spots and other potential hazards.

Tip-overs are rare and are usually resolved by knocking down boom length, removing some of the counterweight, and walking the crane to safety, Kettles said.

While construction is crane-intensive, maintenance is less so. Towers can be climbed from inside, and a significant amount of their care is done without cranes unless heavy components need to be removed. Furthermore, oil and gas facilities have scheduled shutdowns whereas wind assemblies only need major attention when they malfunction.

Alberta-wide, and during the fossil fuel downturn, Kettles said Myshak has roughly 70 crane operators on hand at any given time, with just shy of a dozen working on wind projects compared with roughly 40 working for oil and gas.

“The construction is great income but operations and maintenance are fairly sporadic,” Kettles said. “They’re not something you would build your business on.”