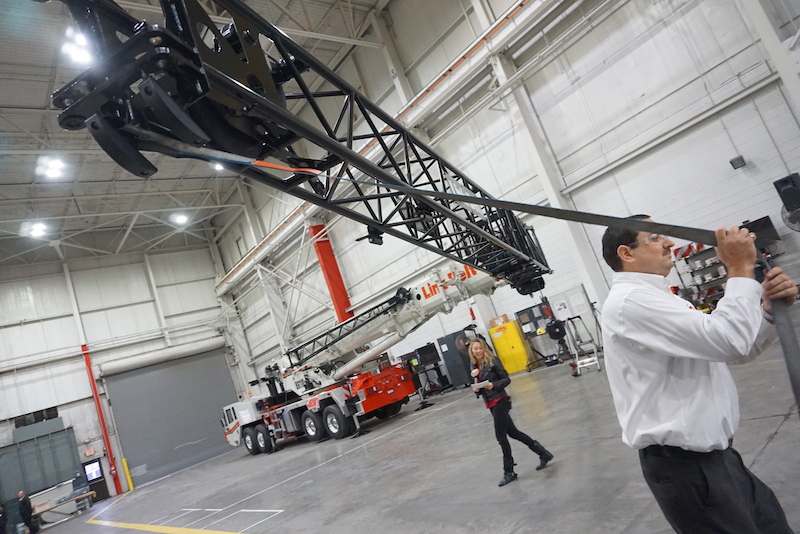 Quite a few of them came from Canada, Link-Belt publicity coordinator Casey Smith said when the four-day event was all over, although he didn’t have exact numbers.

One of those Canadians was Sheldon Baker, president and owner of Canadian Crane Rentals Ltd. of Wingham, Ont. He rides his Victory Kingpin touring bike on a fall run through that part of the world each fall and every third year piggybacks that ride with a pilgrimage to CraneFest.

“I’ve been down many times,” said Baker, who has owned Link-Belt cranes since the 1980s. “What I like about them is every three years since they started with this CraneFest, they always introduce the new models. And the biggest thing I like about it is when you go through the factory, you see all the improvements.”

The first CraneFest took place 20 years ago, Link-Belt’s Bill Stramer — vice-president of marketing, sales, and customer support — said during introductions before the plant tour on Oct. 2, the final day of CraneFest 2015.

Stramer admitted that the current iteration lacked the razzle dazzle of some earlier CraneFests — such as an eight-foot jelly doughnut and an old-time Kentucky outhouse “to demonstrate machine capacities.” Nor did it have an Elvis impersonator or a Busch Grand National series race car.

But CraneFest 2015 did introduce three new Link-Belt machines and it featured plant tours that revealed details about how those machines are made. And the night before the tours, attendees were treated to a dinner and charity auction at Keeneland Race Course, the site of the 2015 Breeders’ Cup horse races this October as well as the world’s largest auction of thoroughbred race horses. (Fun Canadian fact: The most successful sire in the history of Keeneland was Ontario-born Northern Dancer, which won the Kentucky Derby in 1964, Keeneland auctioneer Ryan Mahan said.)

Among the new cranes making their debuts at CraneFest 2015 was the HTC-86110, an hydraulic truck crane that features a 164-foot main boom and a main boom tip height of 172.6 feet. The

crane also comes with an optional one-, two-, or three-piece lattice boom fly. This patent-pending fly assembly has a new pinning system that eliminates the need for pounding pins into place, as Link-Belt project engineer JP Jones showed during a live demonstration inside the Link-Belt plant.

To erect the 35-foot section of the fly, Jones didn’t need to start the engine to telescope the boom, explained Link-Belt spokesperson Susi Sivkov. Nor did Jones need a ladder or a hammer.

“This is not the normal Link-Belt method for fly erection and what happens next will make every operator smile,” Sivkov said.

That was the cue for Jones to employ a cordless drill to do the job, although an air impact gun or even a manual crank would have worked just as well, Sivkov said.

Baker was impressed enough with the HTC-86110 that he has ordered one for his fleet of about a dozen cranes. Among the features that caught his fancy are that the HTC-86110 has 48,000 pounds of counterweight (compared with 39,500 pounds for the 100-ton model), joystick controls, and a tilt cab.

“It’ll fit right into my taxi fleet for millwrighting,” said Baker, whose wife and business partner, Lisa, and their daughter, operations manager Sheena, drove down to meet him at CraneFest. Their company is in the middle of Ontario farm country where a common job these days is tearing down 30- and 40-year-old elevators. “We put ’em up years ago with 40-ton cranes,” Baker said. “But now they’ve built everything around them you can’t get to them.” Except with larger cranes, such a 90-tonner he deployed for a recent job.

The 100RT on parade bore the name of Montreal-based Guay Inc. on its boom, cab door, and superstructure. The crane features a six-section164-foot pin-and-latch boom with over 172 feet of tip height and a working radius beyond 140 feet, Sivkov told a crowd who huddled on bleachers outside during a light drizzle. The RT100 also has optional on-board fly extensions, which are “interchangeable with several existing Link-Belt RTC and HTC models,” says a company news release.

The new TCC-1400, meanwhile, boasts a job-site reach of 195 feet, noted Pat Collins, the company’s director of product marketing. Its formed main boom has a tip height over 200 feet and a working radius of 185 feet.

“Any other machine would have to be swinging a fly to get to these lengths, not the guy in the 1400,” Collins said.

Like the other new cranes, the TCC-1400 has a three-piece package as an option and features a greaseless pin-and-latch boom, as well as the Link-Belt-designed Pulse total crane operating system.

A TCC-1400 on display at CraneFest 2015 bore the logo of Alberta-based Entrec Corporation.

A highlight of CraneFest were tours of the facility, which one of the guides — Mike Ogle, a district sales manager from Altanta — described as “going into the bowels of Link-Belt.”

While visitors weren’t allowed to take photos in the production areas of the plant, Ogle painted vivid word pictures of how the factory’s 750 workers shape materials such as plate steel into frames, superstructures, and booms.

“We work a just-in-time process where we have enough material for probably the next two to three builds,” Ogle said early in the two-hour tour. Plate steel for the large sub-assembly arrives pre-cut and is bar-coded so that welders can scan them before they begin welding. That enables production control to order new parts immediately.

Not all parts are bar-coded, however. One of the more unusual parts of the plant is known as “The Cat in the Hat Machine.” It’s actually a paint line for small parts, which are hung on hooks before disappearing into the machine.

“There’s no bar codes. There’s nothing really signifying what part is what. But for some reason if it goes in, it comes out the colour it’s supposed to be,” Ogle said. “It could be blue, it could be red, it could be grey. But no one knows how it happens. So that’s why they all refer to as the Cat in the Hat Machine.”

Other than that, procedures at the plant follow a rigorous logic. For example, when a pre-painted bare frame comes down the assembly line, it does so upside down. “The reason it comes in upside down is it’s a lot easier to run your hydraulic lines, your wiring harnesses, (and) lay the axels in, working this way than it is on your back trying to work over your head,” Ogle said.

Pre-painting of parts is an innovation Link-Belt introduced in the early 2000s. It requires more careful handling but prevents corrosion, paint runs, poor seals, and other issues that can arise from having bare metal contacting bare metal, he said.

Throughout the plant, Link-Belt incorporates Kaizen processes in its production. Kaizen is a Japanese term referring to continuous improvement — no doubt an influence of Link-Belt’s parent company, Tokyo-based Sumitomo Heavy Industries. Signs of Kaizen abound in the plant, such as in an orange-coloured rack that has parts at waist height so that workers can pick them more efficiently.

“A while back, a guy would get a pallet of parts delivered to him. What’s he doing? Picking them up? Everything was probably in a hodge podge area,” Ogle said.

In 2009, Link-Belt began building its own formed booms. However, until this June, the plant didn’t have the capability to machine the collars on the booms; so the booms had to be shipped out to have that done and then shipped back. Now the plant has a Burkhart+Weber milling machine to do that work. Elsewhere in the plant is a computer numerical control (CNC) Mitsubishi machining centre that has 240 tools and does all the heavy weldments up to 80,000 pounds. The plant also has a second, smaller Mitsubishi machining centre.

“We also have welding vending machines, believe it not,” Ogle said. Rather than snacks, the vending machines dispense special wires or other supplies. A welder swipes his or her barcoded badge, keys in the job number, and the material gets dropped into that job.

The plant even has its own parts superstore — “some guys call it Walmart,” Ogle said. But it’s not as super as it used to be when parts were stacked on shelves to the ceiling. The shelves now reach about chest height and contain just enough just-in-time parts to build the next three or four units.

An interesting feature of the production floor parts store is that workers from the parts distribution centre who need a part to fix a machine in the field can come over from their building to pick a part but not the other way around.

“The idea is a machine down in the field is a heckuva lot more important than a machine being built here at the factory,” Ogle said.