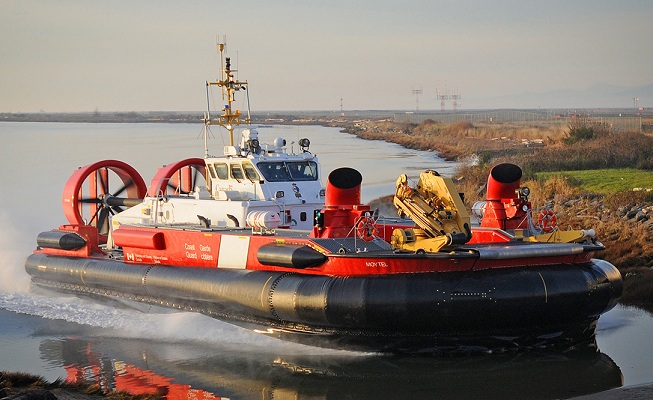 A hovercraft equipped with a removable crane helped speed up what has traditionally been a time-consuming and tedious job.

CCGS Moytel, from the Canadian Coast Guard Hovercraft base at Sea Island, B.C., used an HS Marine crane to replace a dozen beacons along the shores of Harrison Lake.

The resort town, about 150 kilometres east of Vancouver, is a popular waterway for recreational boaters who rely on the beacons to safely navigate the lake.

The old beacons were in various states of disrepair, with some requiring new bases and towers along with an updated LED light and solar panels.

“The first beacon we did took almost all day because it was almost a complete rebuild on the set of pilings,” said Capt. Bruce Briggs.

“On the second day we did five rebuilds … because crews could reuse the base. It was a pretty quick turnaround because we were able to dismantle and remove all the old equipment and then swing the new stuff up.”

The coast guard acquired the British-built Moytel in 2013 and it went into active service the following year.

The project marked the first time a coast guard hovercraft was able to transit up to Harrison Lake to help with the beacons. All in all, it took about one week in mid-November to replace the beacons. In the past, crews relied on sea trucks to conduct the maintenance, but those vessels are too small to carry a crane large enough for the job.

Crane custom-built for marine use

The Moytel packs an AK 48 E4 crane built by HS Marine out of Italy. Part of the company’s AK series, which feature fully foldable knuckles, the telescopic, boom-type cranes are each custom built for specific sea conditions.

“Having the ability to use the crane with its great, long reach, we … could just lower the old tower down and then sling up all of the new stuff,” Briggs said. “Some of these beacons were located a fair reach up the side of a rock cliff … It saved a lot of time just getting gear up and down the slopes.”

The AK 48 E4 easily lifted the beacons, while the 75,000-kilogram ship ensured a stable platform for crews to complete their work.

“None of it was very heavy work but I think the construction job was made a lot easier because the hovercraft could hold its station and then the crane could support the weight of the beacon as crews rebuilt it. Basically they started from scratch. They took all the old equipment off and take a bare set of pilings and build it on top. The crane made their lives a lot easier because they could suspend this weight and we could hold it pretty much in the right spot the whole time they were working on it.”

Not only was the crane a boon, but the hovercraft, which can reach speeds of 50 knots, was able to quickly move from beacon to beacon.

“We’re fast, so it allows us to cover a lot of ground, in a relatively short period of time,” Briggs said. “We could get from one site to the next fairly quickly and, because of the reach of the crane, we could just pick up (the new beacon) and set it on the right spot.”

The Moytel operates primarily in an ocean environment at the Sea Island base near the Vancouver airport. The crane is not used for search-and-rescue missions and is stored in a maintenance hangar unless needed.

“We’ve got a neat securing arrangement … it’s basically the equivalent of a large nut that we torque down on to the deck,” Briggs said, explaining that crews can drive the hovercraft right into a maintenance hangar that houses the crane when it’s not in use. A gantry crane inside the hangar easily swings the hovercraft’s crane into position so it can be fastened to or removed from the ship in about half an hour.

“We don’t carry it all the time as a rule. We were asked to support the rebuild of these beacons so we put the crane on specifically for that job.”