Features
Canada’s 2016 crane forecast: Uncertainty with a chance for oil 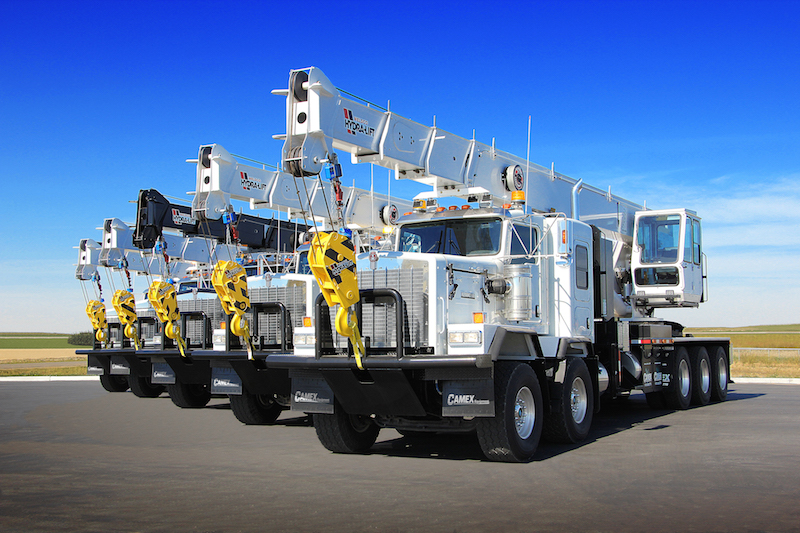 With 2015 now history and all eyes on the coming year, commodity prices and infrastructure commitments top the list of concerns.

In some respects, Stevens says, it’s business as usual. Work is in full gear on projects such as Canadian Natural Resources’ Horizon Oil Sands and Suncor’s Four Hills. However, Royal Dutch Shell recently announced it will abandon its Carmen Creek project in Peace River, which was projected to produce 80,000 barrels daily.

Stevens expects oilsands projects already underway will be completed but new ones are less likely. “A lot of engineering goes into those projects and they have a long lead time, so with oil prices where they are construction is going to be quite slow for the next few years,” he says

Stevens is more hopeful for liquefied natural gas projects, singling out Lelu Island near Price Rupert BC involving Malaysia-based Petronas and another one by Shell in Kitimat BC.

“It’s going to be exciting for Canada if we can get final investment decisions,” Stevens says, adding that plans remain subject to environmental review. “They’re both likely to go, but the price of gas needs to go up.”

Which way will political winds blow?

Two landmark elections also stand to have an impact. Time will tell how the election of the federal Liberals will affect oil and gas, Stevens says.

“One of the bigger concerns is their approach to the environment … just what happens with pipelines and rail transportation because these are important for the oilsands to continue to grow.”

Last year’s election of the NDP in Alberta raised eyebrows in business circles. Stevens says Premier Rachel Notley “has made some right moves,” including quickly launching a promised review of energy royalty payment rates, with recommendations not yet handed down at press time.

“Obviously there’s still uncertainty with that, and the worst thing you can have for business is uncertainty, so the fact she did this quickly was a good thing, though we haven’t yet seen the result,” Stevens says.

Entrec has company in the oil patch. Darren Lunt, president of Weldco Companies, which is also based in Edmonton and produces heavy-equipment attachments and truck-mounted cranes for the oil and gas sector, says 2015 was indeed challenging.

“We’ve been on work-share since June,” Lunt says. “Our Hydra-Lift (crane) division has been basically repurposed to support our attachment line until such time that we see crane sales starting to come back.”

Lunt says confidence in resource markets is so low that a significant number of truck-mounted cranes are sitting parked.

“We’re doing what everybody else is doing,” Lunt says. “We’re reallocating our resources to sectors of the market that are still working.”

Lunt doesn’t think the current lag is comparable to the 2009 downturn. “It’s harder on Hydra-Lift, but other parts of our business are compensating for the lack of crane sales. We’re very much diversified. Forestry is going strong, we’re pushing ahead with road maintenance, and mining is starting to show a bit of a pulse so our mining attachment division is starting to pick up.”

With oil down, Weldco is taking time to fine-tune its crane line. “We’re looking at updating some of the key components and enhancing some of the features and benefits so when the market does come back we can go to our customer base and show what we’ve done.”

In Surrey B.C., Falcon Equipment does custom fabrication, installation and rigging across much of western Canada and has weathered oil and gas woes by maintaining a diverse user base, says marketing manager Andrew Grant.

“We’ve managed to pick up steam in other areas,” Grant says. “Construction is booming in some of the regions we’re in and building supply companies are continuing to add equipment to their fleets.”

“They would need to adapt their refineries to accept that new type of oil and you need cranes to replace pipes and do other work,” Gagnon says, explaining that business is down 20 to 30 per cent from the previous year and work of this sort would be meaningful.

Mining has also been challenging in Quebec. “Natural resources are pretty low in the market right now, so it’s slowed some projects,” Gagnon says. He adds that low commodity prices have also hindered activity at the province’s aluminum smelters, and wind power projects, a major player in Quebec in 2012 and 2013, have also eased off.

A big news-maker last year was the conclusion of the Charbonneau commission’s public inquiry into corruption and collusion in Quebec’s construction industry. A long-awaited report, released in November, proposed 60 recommendations to clean up the system of awarding contracts.

“A lot of projects were delayed because of that inquiry,” Gagnon says, adding that activity in Montreal has regained strength.

“We’ve had fairly strong employment the last couple of years,” he says, adding Prime Minister Justin Trudeau used his local’s Oakville office as a backdrop for his campaign promise to double federal infrastructure investment from $65 billion to $125 billion over the next decade.

“I feel very positive about our prospects for work, although there’s always the unknown that nobody can predict — things like interest rates which if they rise could dampen the residential sector a bit,” Gallagher says.

He says mining is strong in Ontario, with new gold mines near Timmins and Rainy River, though he adds that weak mineral prices could potentially hinder new projects. And, he says, the Ring of Fire, a mineral-rich area in northwestern Ontario, lacks needed transportation and hydroelectric infrastructure investment. “We’re not 100 per cent sure what’s happening, but you’ve got to think that maybe with the new federal government there might be some discussion about that,” Gallagher says.

Local 793 also represents crane operators in Nunavut, and Gallagher says mining remains active in the far north, though low prices for commodities are resulting in reduced forecasts for projects such as the iron ore mine on Baffin Island.

In southwest Ontario, with a fleet of a dozen cranes ranging from a 26-ton boom truck to a 200-ton Liebherr, Randy Moir of Moir Crane Service describes conditions as “good but not spectacular,” with some work on wind farms and renovations to a Chrysler auto assembly plant.

Moir says residential construction has been fairly strong in Windsor. “We’re starting to see some apartment buildings going up which we haven’t seen in 15 years in this area,” he says, adding that initial efforts to revamp a major border crossing to Detroit have helped. “We just recently finished the (Herb Gray) Parkway here in town, which is the route to the new (yet-to-be-built) Gordie Howe Bridge,” Moir says.

“We’ve had our ups and downs here for the last decade, but the last two or three years we seemed to have rebounded out of the doldrums of a really bad economy,” Mohr says. “Our ability to sustain ourselves without being heavily invested in the automotive trades has diversified us enough that I’m looking forward to the next 10 years.”

Outlook dimmer in the Maritimes

In Fredericton, Capital Crane Rentals president Brian Snow is less optimistic. “The economy is very slow around these parts,” he says.

With a 10-unit mobile fleet ranging up to 100 tons, most activity has been installing rafters, trusses and air handling units on modular homes and other buildings. “It’s been a little better than the previous year but it’s still slow,” Snow says.

Aside from plans to build a couple hotels, Snow says he knows of no other significant projects in the works. “There’s a mine supposed to open up but they’ve been talking about it for years,” Snow says, also expressing hope for an eastern pipeline from the oilsands.

Cropac Equipment in Oakville, Ont., supplies markets across Canada and senior vice-president Jacques Beaudoin says conditions vary regionally but he anticipates an overall 15 per cent decline in markets this year, mostly due to low oil prices combined with a low Canadian dollar.

“Cranes are pretty much supplied or purchased through the American dollars to the dealers,” Beaudoin says. “That has a major impact on a Canadian company having to purchase in U.S .dollars or convert to Canadian dollars. The volatility of the Canadian dollar and oil prices seem to go hand in hand.”

Beaudoin says Quebec seems to be ahead of the pack in terms of growth and activity. “That’s primarily because finally after years of things being fairly flat if not down they have several big projects on the go.” He says the Turcot railyard and the Champlain Bridge developments, in particular, are fuelling activity and eventually opening markets to smaller players.

One thing Beaudoin has noticed is the resurgence in the crawler crane market, particularly smaller machines. “It’s just a cycle,” he says. “It comes and goes. People are getting jobs that seem to be lengthy enough that it makes sense to buy them…they don’t want to take the chance of not having a crane available so they’re buying the smaller crawlers themselves.”

In Ontario, Beaudoin says, the rough-terrain market was relatively small 10 to 15 years ago “whereas today that has completely turned around and everybody we deal with has rough-terrain cranes.”