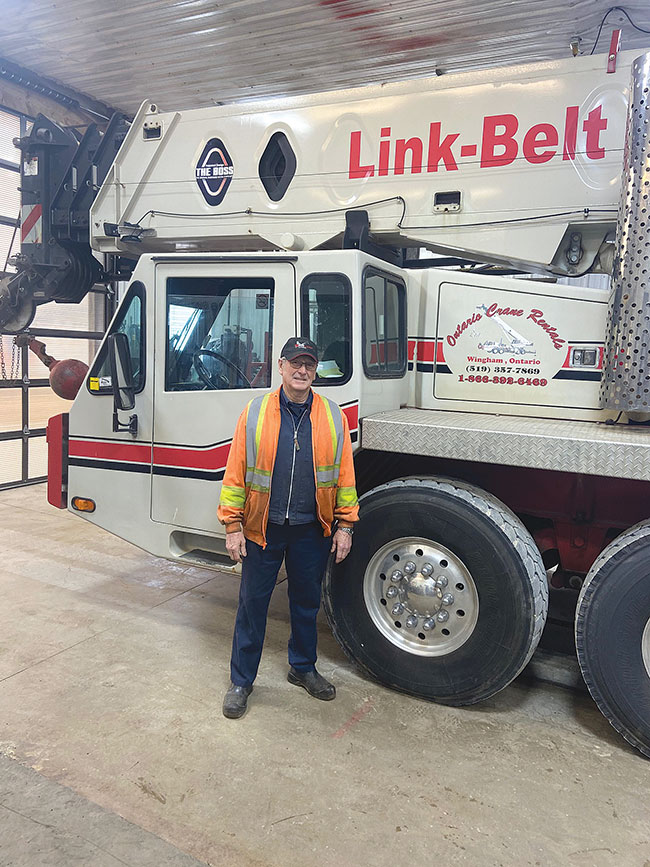 Merv Baker is still going strong after over 50 years in the crane industry. Photo: Submitted

Speaking with Merv Baker about his life in the crane industry is an opportunity to learn about the past. It can also be stunning to see what was considered normal in those days.

“I left school in grade eight,” says Baker. “I got the last beating from my teacher that just about half killed me. And I went to work. And I’ve never looked back.”

A schoolteacher dealing out corporal punishment would be a major scandal today, but it was a fact of life in Baker’s youth. A less horrifying artifact of the times is the fact that Baker then walked on to a construction site, was hired and trained on the job with no certification or classwork. That led to an opportunity for an apprenticeship with Ontario-based Canadian Crane Rentals (CCR). Baker earned his crane ticket in 1965.

“I’d work for Ontario Hydro eight hours a day,” says Baker. “Then I’d go to a [CCR] crane job at night. And if I had a guy that wanted to pour concrete or needed a crane for some lifts, there wasn’t anything up here. So, it was a pretty big market. Within a year after I bought the first crane, I ended up buying another one.”

Baker was eventually laid off by Ontario Hydro, so CCR became his main focus. He worked a few large-scale projects but mostly kept to smaller jobs that wouldn’t keep him tied up for too long.

“My theory was if you work with small contractors, you’re always available because you can say ‘I can be there tomorrow,’” says Baker. “But if you’re on a job for a week or two weeks or three weeks, you lose that customer because he goes somewhere else. So, I just kept rolling.”

Over time the business flourished. Canadian Crane Rentals acquired more cranes and continued to expand. Working long hours can drain your energy – particularly for an owner and operator as fastidious about maintenance and repairs as Baker.

“If you own the business you don’t have much of a life,” says Baker. “If you’re not big enough to hire a mechanic, on Monday morning when those four or five cranes have to roll, somebody had to fix them all day Saturday and Sunday. You work, work, work and it’s not a good home life if you don’t get to see your kids.”

Fortunately for Baker, he moved the lot for Canadian Crane Rentals next to his home. Once his son Sheldon was of age, he could spend more time with him as his son helped fuel, wash and repair the cranes. He also got his daughter Teri to help with lettering on the cranes when he could.

“I used to get so mad at her. I’d get a crane in, clean it all up and get it set up for her and then she wouldn’t show up to come put the name on the crane boom,” says Baker with a laugh. “I still tease her today. ‘Oh, the artiste isn’t in the mood.’”

Sheldon; however, did take to the crane industry. Baker remembers bringing a 12-year-old Sheldon with him to jobs in the summers, such as setting steel with a company out of Orangeville.

“I’d take him along with a 25-ton Grove crane I had,” says Baker. “He could run that crane better than I could at 12 years old. He was with me all summer.”

Eventually, Sheldon purchased CCR from his father and today serves as company president. Sheldon’s daughter Sheena serves as operations manager and is also an owner and instructor at Huron and Bruce Safe T Training. Another grandchild, Dustin, also operates a crane for CCR.

With Sheldon at the reins of CCR, Baker left the company and the industry. However, about a decade ago, he purchased a small company called Ontario Crane Rentals. His initial plan was just to sell off the assets of the company, but it didn’t work out that way.

“I bought it and, unbelievably, I landed a three-month job,” says Baker. “Then that led to buying a better crane and then I landed another job. So, I had to buy another crane. Same old story.”

Doing small jobs with Ontario Crane Rentals is rewarding and allows him to pick and choose jobs he’d like to do.

Evolution of an Industry

Looking back, Baker says the changes in the industry in his time have been unbelievable. The first crane he ran, with a 12-ton capacity, was considered a huge crane in the 1960s. The advances in size, capacities, durability, and the introduction of computers have radically changed the game.

“It’s something you’ve got to keep up with,” says Baker. “The whole crane business is like day and night from when I started to what it is today.”

Ontario Crane Rentals have performed a variety of interesting lifts over the years. In this case, from earlier this year, Baker helped lift a fishing tugboat that had sunk in Bayfield, Ont. Photo: Submitted

While Baker appreciates the modern advances in crane technology, he does feel that something has been lost in the process as well. While computer technology has advanced crane work, he feels it could be a crutch for crane operators who might not be able to run the crane without it. The reliance on high technology could prevent them from developing their own judgement as well.

“What happens if the outrigger sinks? I asked two guys that question here a while ago. I said if suddenly that back outrigger starts to sink and you’ve got 80 feet of boom out and a load on it, what are you going to do? They both looked at each other and said, ‘I guess we’d be upside down.’ I said ‘wrong answer.’ You try to save the crane, you boom up, lower the load and swing it away from that outrigger.”

About two weeks after that encounter, Dustin was telling his grandfather about a situation where the outrigger started to sink on him.

“I said ‘what did you do?’ and he said ‘I remembered some grumpy old guy that showed me this one day.’ And I said ‘well, thank you, but I’m not that old yet.’”

Asked what advice he might give to someone looking to start a crane business, Baker advises not to focus strictly on growth and expansion saying you don’t want your reach to exceed your grasp.

“It’s like a baby. A baby learns how to crawl. Then it learns how to walk, and then it learns how to run,” says Baker. “So, when you start your crane business, don’t bury yourself in debt. Get yourself financially set so you know how much you can bring in and have a few dollars in case you need it. If you’ve had a few good years, now you can look at expanding.”

He also emphasizes that the freedom that comes with being your own boss comes at a price. Often in the form of working 12- to 14-hour days for six or seven days a week.

Baker turns 75 years old this year. And while retirement is an enticing prospect for most people in his age group, he still enjoys the satisfaction of a job well done.

“I enjoy going out and seeing the customer and doing a job,” says Baker. “What always makes me feel good is when you see a younger guy you just did a job for and he comes over and says ‘boy, that really worked well, that’s fantastic, thank you for a fine job.’ That makes me feel good to hear a comment like that.”