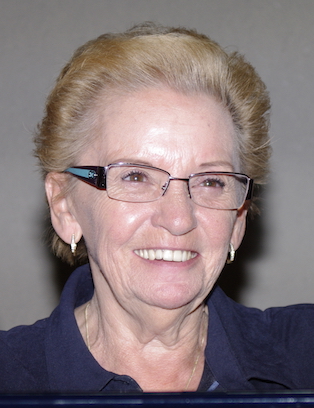 The chief executive officer of an Edmonton-based crane training company has won an Award of Merit from the Canadian Standards Association Group.

Judy Mellott-Green, CEO of All-Canadian Training Institute Inc., received the award during a

special ceremony at the CSA Group’s annual conference this June in Vancouver.

“It just sort of knocked me right over. I couldn’t believe,” Mellott-Green said in a phone interview.

She received the award “in recognition of exemplary goal-oriented leadership, dedication to worker safety and advocacy of national harmonization in standards for overhead cranes and rigging,” the CSA Group said in a news release.

“Am I still on that kick? Yes,” Mellott-Green said.

Mellott-Green was the inspiration for the Canadian Hoisting and Rigging Safety Council, which was established following the 2011 Crane & Rigging Conference Canada in Edmonton. While she was an original member of the council, she is no longer involved. However, she still represents the CSA as a liaison on American Society of Mechanical Engineers’ ASME B30 standards committees for overhead cranes. And she previously served for several years on an Alberta Occupational Health and Safety industry committee.

“I haven’t gone away,” she said. “I just have to take a different course.”

Meanwhile, her company, which celebrated its 20th anniversary in 2014, is “really really busy,” she said. “Our business is actually growing. We’re now international.”

Mellott-Green was among 13 winners of the 2016 CSA Awards of Merit.

The winners are “an exceptional group of people who have advanced standards development at CSA Group,” the news release quoted Magali Depras, the group’s president of standards.

“Without our volunteers and respected leadership from our technical committee members, CSA Group would not be a leading standards development organization,” Depras added.

The awards were established in 1979 “to honour and recognize leadership in voluntary standards development,” the release said.