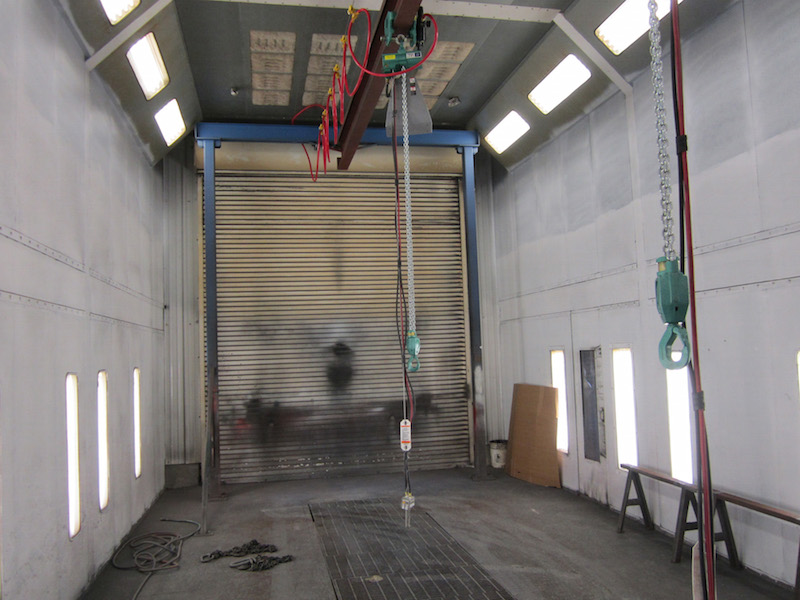 The installation of the Profi 2TI air operated hoists has helped boost productivity of the spray booth operated by a customer of ELS, which is a major representative in the U.S. for J. D. Neuhaus.

previously handled the components designed for spraying, the release said. But with loads of up to two tonnes being handled, “it was obvious that fully mechanized load movements would improve working conditions, increase productivity and potentially enhance finish quality,” the release said.

The JDN hoists operate within an air-pressure range of 65 or 85 psi. At the higher pressure rating, a lift capacity of two tonnes per hoist is available as is a full-load lift speed of 8.9 feet per minute.

“All lift and load traverse movements are undertaken using pendant controllers (single handed operation), with a pendant drop length provided to ensure that it can fully clear any freshly sprayed objects as well as providing a good working clearance for the spray gun operator,” the release said. “The hoists are suspended from trolleys running on the overhead standard beam, so providing the horizontal load movement.”

Each hoist is fitted with an airline filter regulator unit, a steel chain retention box, and a muffler/oil collector “to prevent spent oil mist dripping onto newly painted products.”

JDN’s Profi TI hoists have individual lift/load capacities from 550 pounds up to 100 tonnes. These hoists may be used for oblique pulling under special safety provisions. In addition, hoists can be fitted with optional trolleys that run in an overhead support beam to provide horizontal load movements. Trolleys available include manual, reel chain or motor operated versions, depending upon the degree of mechanization required.