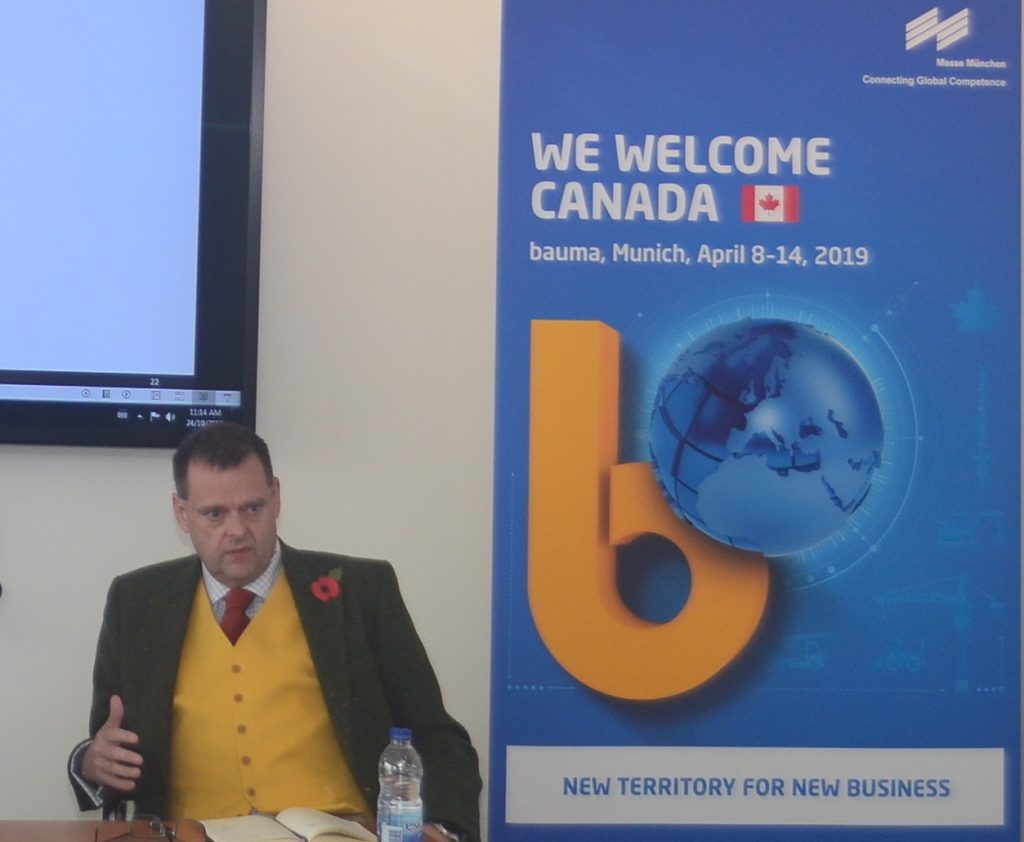 Skyjack’s Malcom Early discusses the importance and relevance of bauma 2019 during a special sneak peek of the upcoming event held for media representatives at the Canadian German Chamber of Industry and Commerce.

Canadian industry is eager to showcase its latest and greatest technologies at the 2019 edition of bauma, the world’s largest trade show for the international construction machinery, mining equipment, and building material machinery sectors.

Show organizer Messe Muenchen GmbH and the German engineering federation VDMA invited Canadian media representatives to the Canadian German Chamber of Industry and Commerce on Oct. 24 to get a sneak peek of what to expect for bauma 2019.

The 32nd edition of the show will be even larger than the 2016 edition, with an estimated 3,500 exhibitors from 58 countries spread out across a massive 614,000-square-metres of expanded exhibition space; and nearly 600,000 attendees from 219 countries. Due to increased demand, hall space was increased for the 2019 edition of the show by 20,000 square metres. There are now a total of 18 halls, two more than in bauma 2016.

During the presentation, Liebherr Canada’s Marc-André Roger and Skyjack’s Malcolm Early discussed the importance and relevance of the triennial show and shared their excitement about Canada being the official partnering country.

“From my point of view, the scale and the popularity of it is huge. From our experience it’s always been a selling show,” Early said, telling those attending bauma for the first time to make sure they break in their shoes before they get there if they intend to walk the three-kilometre long show from east to west.

Skyjack will be bringing some special Canadian treats with them for attendees checking out its latest technologies.

“We’re going to bring some Canadian beer over,” he said. “Skyjack special bauma beers, poutine, beaver tails, chicken wings… we like the Canadian theme. We might be doing a beer tasting with the local competition. We’re looking forward to the show, because we work hard and play hard.”

Marc-André Roger of Liebherr Canada, which has operations in nine locations across Canada and products spread out across many of the country’s more remote regions, spoke extremely highly of the show and considered it a unique opportunity for exhibitors within the industry.

“It provides an invaluable platform for every company within the Liebherr Group,” he said. “We regard bauma as a unique exhibition in the world. There is no other exhibit that gives this kind of global opportunity.”

“We’ve doubled the number of Canadians coming to show [compared to 2016],” said Neeta Correa of Canada Unlimited, official representative of Messe Muenchen GmbH in Canada, who added that they are expecting between 50 to 55 Canadian companies to exhibit at bauma 2019.

In addition to the massive trade show, bauma 2019 will feature a 3,000-square-metre area named Think Big!, dedicated to combatting current and future skills shortages, and supporting and attracting the younger generations to the industry. Approximately 20,000 young people attended the Think Big! attraction at bauma 2016.

Skyjack’s Malcom Early discusses the importance and relevance of bauma 2019 during a special sneak peek of the upcoming event held for media representatives at the Canadian German Chamber of Industry and Commerce.