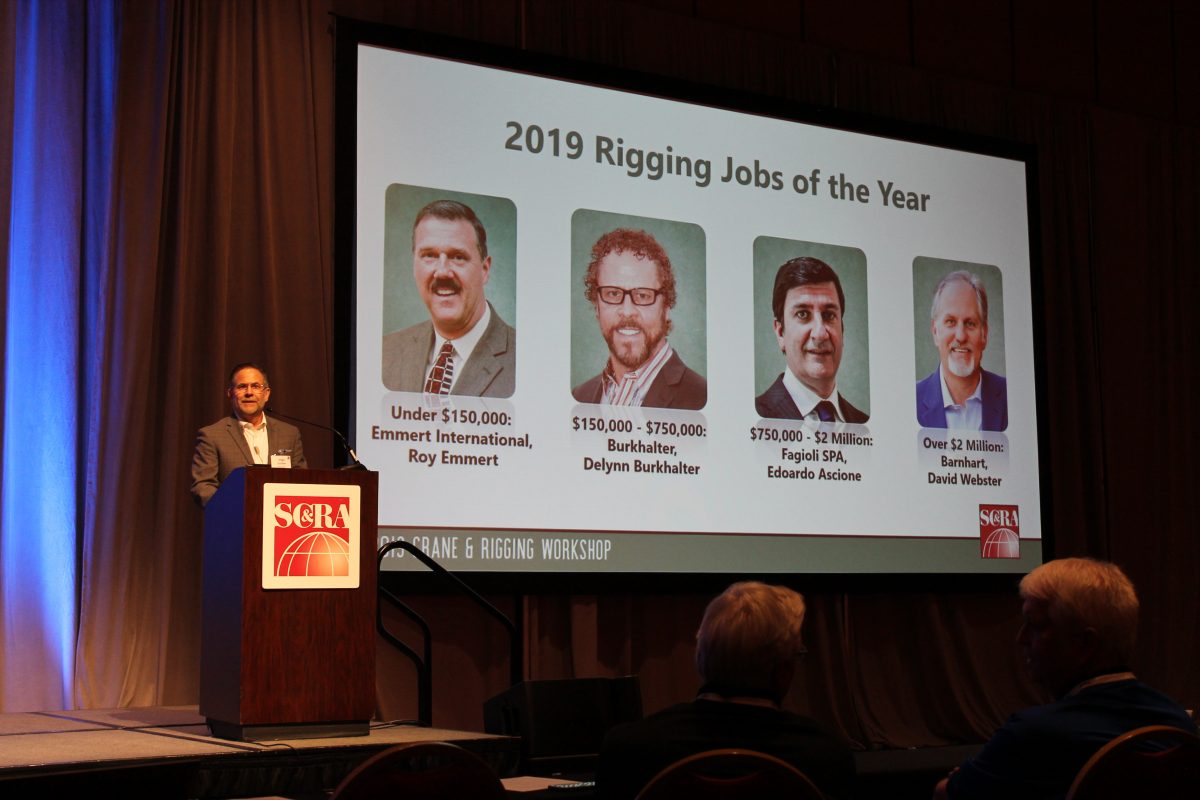 What does it take to win the Rigging Job of the year? Specialized Carriers & Rigging Association (SC&RA) members were recognized for meeting some of the industry’s most complicated challenges and responding with over-the-top professionalism at this year’s SC&RA Crane and Rigging Workshop held in Phoenix, Ariz. Barnhart Crane & Rigging, Fagioli, Burkhalter, and Emmert International all took home the prized award for the SC&RA Rigging Job of the Year in their respective categories.

Over $2 million: Barnhart Crane & Rigging assembles one of the world’s largest presses

In February 2018, Barnhart Crane & Rigging completed a project whereby they received 37 press components from the Port of Long Beach, Calif., ranging from 250,000 to 732,000 pounds, transported the pieces over the road to the site and assembled one of the world’s largest presses. Innovation was the key to success as the team meticulously put together the various components of the press, a process which required multiple impressive lifts: eight pieces at around 700,000 pounds, two lifts at just under 3,000,000 pounds and one massive lift at 4,400,000 pounds. The Barnhart Crane & Rigging team designed, fabricated and load-tested more than 40 custom pieces of equipment to meet the needs of the job. In total, 3,500 engineering hours were used to develop the execution plan for the project, which saw no damage, injury or illness claims.

In late 2017 and into 2018, Fagioli was called to execute the operation of stacking and de-stacking a 997-ton GTG module. After the necessary tests executed by the client, Fagioli de-stacked the module in 2018 in order to ship the two modules separately for their final destination. For the execution of the project, Fagioli came up with the idea to lift the module and skid it – hanging to the tower-lift system. Key equipment utilized included towers, strand jacks, PPU for strand jacks, skid shoes, forklifts, manlifts, a Theodolite and a water-level indicator. Precision engineering undertaken by 15 total Fagioli personnel, including five engineers, was of the utmost importance throughout all five phases of the project. Ultimately, both GTG modules were lifted, placed, skidded and set onto their new foundations without incident, with the Fagioli team monitoring every element from start to finish and zero-accidents for the project.

In the fall of 2018, a four-way point of confluence between several different regional and commuter rail lines, known as the “Hole in the Wall,” stood before the next phase of the ongoing TEXRail commuter rail project outside Fort Worth, Texas. Burkhalter was contracted to widen the Hole to accommodate an additional rail line, and this meant they had to widen two rail lines and a section of Highway 280 above. They constructed the new bridges before moving them into place via a temporary bridge consisting of runway girders placed over the Hole in the Wall. After accomplishing this feat not once, but twice, in a work area with extremely minimal clearances above and below, Burkhalter then set out to lift a section of an active highway in order to lengthen it before setting it back down in place. Ingenious engineering and careful planning within the parameters of a work schedule (with barely any inoperative hours) made for a highly successful project.

Last October, Emmert was challenged with moving two 168,000-pound thermal heaters across a pre-treatment facility in Freeport, Texas. Crafting a path of travel for the heaters involved navigating a complex web of obstacles, a feat accomplished with a custom-engineered self-propelled 120-foot track system. Jacking the 45-foot long heaters onto the 500-ton Hydra-Slide track required both force and grace, but Emmert was able to execute a successful project without incident.